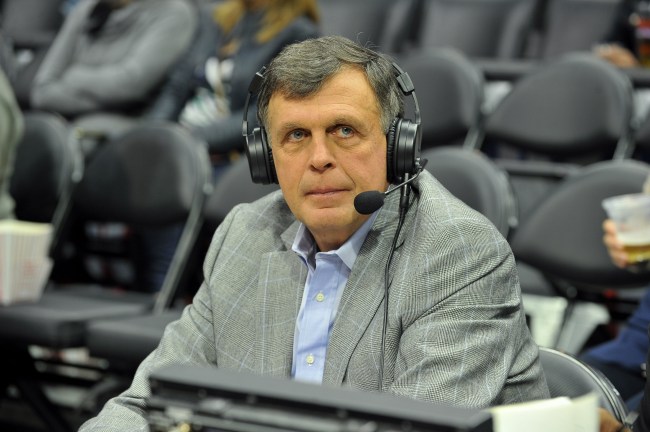 Kevin McHale of TNT just made a rookie mistake during tonight’s broadcast of the Boston Celtics-Philadelphia 76ers game — and, because of it, we get to laugh a little bit. Remember, Kevin, the microphones are always armed and ready.

During tonight’s Boston Celtics-Philadelphia 76ers game, Kevin McHale was talking about someone he used to “get into it with” as TNT cameras came back from a commercial break, going with the full-blown “dickhead” insult. The former NBA big man and current analyst was presumably talking about a trainer who was helping Jimmy Butler after a timeout, but who really knows? Take a look at the little mistake below if you’re looking for a good laugh.

TNT's Kevin McHale caught on the mic calling someone a "d—head" during tonight's Sixers-Celtics broadcast. pic.twitter.com/Oi0Cz8ZyJ2

Clearly, Kevin McHale had no idea that the broadcast team was back on air yet, otherwise I doubt he would’ve gone there, but, hey, what happened, happened. It didn’t seem to take long for McHale to get notified or understand what he said was actually caught on live TV, so he quickly apologized for the small mishap.

McHale apologized for his comment in the 3rd quarter: "JJ and I were talking about a guy we knew, and I used a very unflattering, not nice term and it caught the air." https://t.co/FuXIxhTbis

This happens to the best of them, so Kevin McHale’s just the latest commentator who got caught having a bit of a loose tongue while working a sporting event. He owned it and moved on, which is all you can really do when something like this happens. I just hope whoever he was talking about didn’t find out about this, because that could be a pretty awkward conversation the next time they’re in the same room.