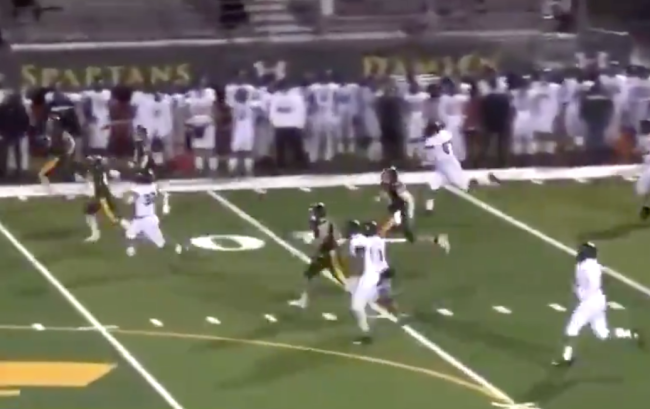 Prior to watching the video below of Keyan Burnett, I didn’t know much about the kid. Sure, he’s still only a high schooler who’s just now playing his junior year football season because of COVID delaying the fall season to the spring — so why on earth would I know much about him? — but, after doing a little research, it turns out the tight end prospect seems to have a bright future ahead of him.

Not only is Keyan a four-star recruit, per ESPN, who’s already committed to the USC Trojans, but he now has a viral video that’s sure to bring a little added swag to his name the moment he steps foot on Southern Cal’s campus. Why? Because the kid just pulled a DK Metcalf and sprinted 85 yards to track down an opposing player, which prevented a touchdown and instantly proved how freakishly athletic Burnett is. Take a look below at the video.

Guys, Keyan Burnett is listed at 6’5″, 215 pounds, so it’s not as if this is some small, compact dude doing this. It’s an absolute beast — similar to the bullish Metcalf, who made jaws drop with his chase down of the Cardinals’ All-Pro safety Budda Baker during last year’s NFL season. For comparison’s sake, Metcalf’s listed at 6’4″, 229 pounds, so maybe Burnett fills himself out over the next few years and creates viral moments like DK did while at Ole Miss and during his first couple years with the Seahawks.

Look, I’m not trying to put anymore added pressure on Keyan Burnett or anything, but, sheesh, if you’re capable of duplicating a freak athlete like Metcalf on the football field by producing a viral moment like the above, you better expect the ceiling to be raised a little bit.

As for Burnett’s insane chase down, it not only blew up the Internet, but it also prevented the opposing team (Damien High School) from scoring at all. Then he showed out even more by catching a 69-yard touchdown grab. Nice!

Per the San Gabriel Valley Tribune:

Damien had a golden opportunity to score midway through the second quarter when Gio Russo recovered a Fifita fumble at the Damien 3 and took it all the way to the Servite 3 yard line.

After three pass attempts by Dylan Gutierrez were incomplete, Drake Gonzalez’s 24-yard field attempt was no good. Servite took full advantage on the next play when Fafita connected with USC-commit Keyan Burnett for a 69-yard touchdown pass that increased Servite’s lead to 20-0.

It’s probably weird for a 36-year-old man to be this hyped about a teenage football prospect, but count me among those fully aboard the Keyan Burnett train. The kid’s a hoss, so here’s to hoping he balls out for the USC Trojans and we see him in the NFL one day.