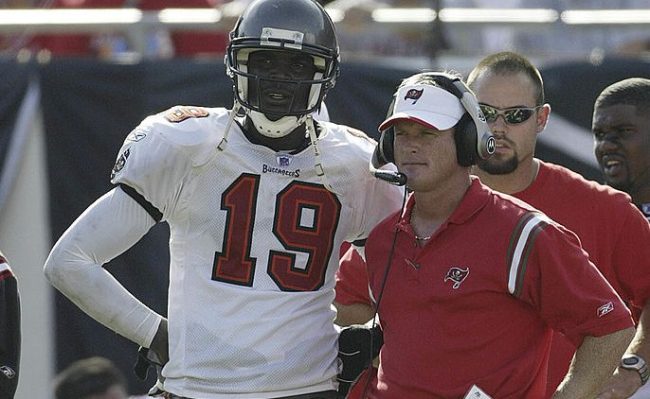 Keyshawn Johnson was on the Tampa Bay Buccaneers from 2000 to 2003 and played his last two seasons under head coach Jon Gruden. The two even won Super Bowl XXXVII together.

And yet, Johnson apparently never bought into what Gruden was selling. On Tuesday, in the wake of Gruden’s resignation over a New York Times report that revealed a long list of racist, homophobic and misogynistic remarks, Johnson teed off.

Even before the second report dropped on Monday night, Johnson called Gruden a “bad person” on his ESPN Radio show after a Friday report divulged a comment that Gruden made about NFLPA Executive Director DeMaurice Smith. Johnson doubled down on Tuesday.

“He’s just always been a fraud to me,” Johnson said. “From day one he’s been a used car salesman and people bought it.”

“I also saw through who he was through the journey of getting a championship,” he added.

Here are his full comments from Tuesday:

“He’s just always been a fraud to me…from day one he’s been a used car salesman and people bought it.”@keyshawn reacts to Jon Gruden’s resignation from the Raiders. #KJM pic.twitter.com/iVu7vlJCjk

Johnson’s comments were met with quite a few reactions and the overwhelming majority spoke to the fact that Johnson has been trying to say his piece about Gruden for years.

Keyshawn Johnson when them nasty and bigoted e-mails came out from Jon Gruden. pic.twitter.com/VBPkBiIavV

Keyshawn Johnson tried to tell everybody

Keyshawn Johnson when them nasty and bigoted e-mails came out from Jon Gruden. pic.twitter.com/VBPkBiIavV

Throughout the years, Johnson has been very vocal about his thoughts surrounding Gruden. Many people discredited Johnson because he and Gruden won a Super Bowl together.

However, as we know now, Johnson has been right about his former head coach all along. And he’s taking full advantage of the opportunity to let everybody know that his thoughts were valid.