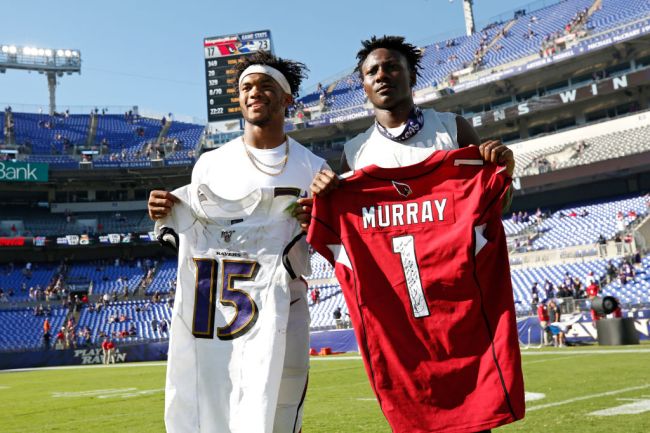 The Arizona Cardinals surprised many football fans when they traded their first round pick to acquire Hollywood Brown and a 3rd round pick. They weren’t a team who was expected to find themselves in the wide receiver market with DeAndre Hopkins, Rondale Moore, and AJ Green already available at receiver.

Then Hopkins got hit with a suspension and Hollywood suddenly became a necessity for the Cardinals.

Hollywood wasn’t expected to have a very difficult time adjusting to his new team as he had a history of being thrown to by Kyler Murray in college. According to head coach Kliff Kingsbury, the transition is going as easily as fans expected.

“I’d say, comparatively speaking, if you’re talking about a guy who didn’t know the quarterback or didn’t play in a similar system and didn’t get to work out with him and hear the calls, see the signals, I would say he’s way ahead of the curve when it comes to that.”

Kingsbury did point out that there was a bit of a readjustment for him as he joined from a very different Baltimore Ravens offense.

“I think it’s similar to what he played in at OU. Obviously, position-wise, no-huddle type stuff, signal-based. But he’s been in Baltimore for a while now, and so it’s just readjusting to that, but I think he feels comfortable in what we’re doing.”

Arziona Cardinals fans have plenty to be excited about with Brown joining the team. He already has a connection with Murray that saw them thrive in college and he should give Murray plenty of chances to show off his cannon of an arm.

Hollywood will also get the chance to prove that he was being held back by the run-heavy offense of the Baltimore Ravens.

The Cardinals will certainly be hoping the Kyler-Hollywood combo can transform their offense into something that looks like their 2018 Oklahoma team that topped 50 points 7 times in 14 games.