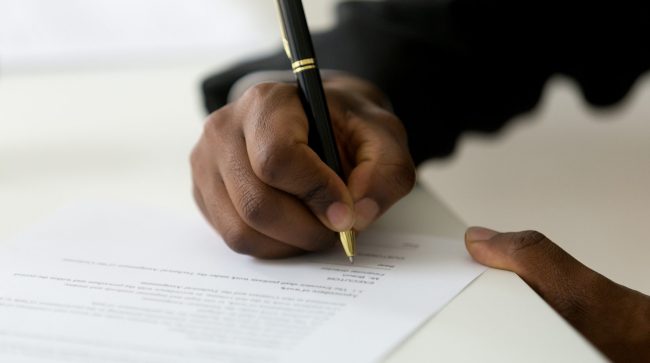 Goodwin, from Charlestown, Indiana, is a five-star offensive tackle recruit. He stands 6-foot-8, 340 pounds and is listed as the No. 4 prospect at his position by 247Sports.

With offers from Michigan, Michigan State, Alabama, Kentucky, Florida State, and 58 other programs, Goodwin can continue his football career at nearly any school he wants. However, all indication is that he is down to the Spartans and Wildcats, leaning toward the latter.

He committed to Kentucky back in April, and then re-opened his recruitment.

Because his commitment is so highly-coveted, Goodwin was invited to make his announcement as part of the 2021 Takis National Signing Day Special. The event, held at The Star in Frisco, Texas, was broadcast live on Stadium sports network.

Sponsored by Takis, the “official snack partner” of the early National Signing Day event, it featured 25 of the nation’s elite high school football athletes as they announced their school of choice. Goodwin was among the nationwide group of recruits to make their decision live on-air.

Moments away from five-star OT Kiyaunta Goodwin of Charlestown (Ind.) High announcing his decision. He’s down to Michigan State and Kentucky. pic.twitter.com/QYKoagwphu

However, when it came time to make his decision, he didn’t.

Goodwin took the stage on Wednesday and was asked where he was going to play his college ball. In turn, he said that he is not sure yet.

Goodwin’s move is rather unprecedented.

If a recruit has not made a decision, he typically does not sit in a massive purple throne in front of a national audience. Not Goodwin.

He saw the opportunity for the spotlight and took it. By doing so, more than likely, Goodwin sent a message to his suitors— he needs more.

He could need more time to think, because he is actually not sure. Or, what could be happening, is that Goodwin has quite a bit of money lined up from both schools and wants more.

In the old days, recruits were payed illegally by bagmen under the table. Now, with Name, Image and Likeness, schools can do so legally.

Obviously, we don’t know why Goodwin didn’t sign on Wednesday. It could be for many different reasons.

But with that being said, he could be positioning himself. It’s a brilliant move if it is.

Regardless of the reason, Goodwin pulled the ultimate power move. He flew from Indiana to Dallas and had the eyes of the world on him for a commitment ceremony, only to announce that he is not making a decision.