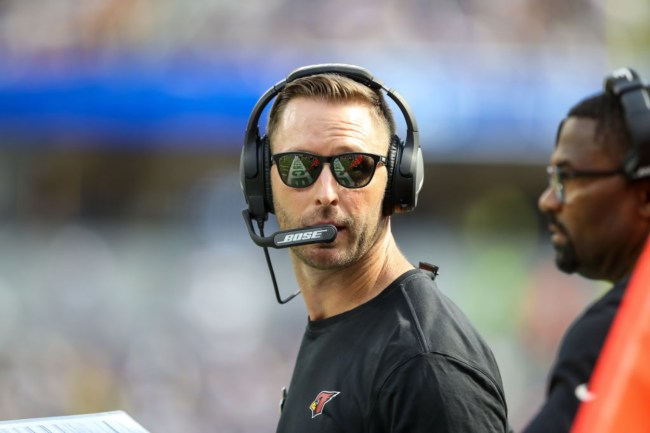 The coaching carousel is a wild, wild ride each and every year. The latest example of that is Lincoln Riley leaving Oklahoma for the USC job seemingly out of nowhere. Now, the Sooners need a new head coach, and they’re rumored to have their sights set on one of the biggest names in all of coaching.

To say Kingsbury would be a home run hire would be an understatement. He’s currently got the Arizona Cardinals rolling right now in what is just his third season as an NFL head coach. He seems comfortable in the NFL and seeing him leave for a college job, even as big as Oklahoma, would be a shocker.

Nevertheless, with Schefter’s report, Kingsbury was asked about the Oklahoma rumors during his press conference on Monday morning.

Kingsbury took it upon himself to deliver some coach speak, while also not completely shutting down the rumor mill.

Later question to Kliff asked why he wouldn't just say he has no interest in the Oklahoma job:

His use of ‘right now’ is interesting, as it seemingly keeps the door open for him to potentially discuss the Oklahoma opening at a later date. It’s unlikely the Sooners will wait until the NFL season is over, however, to name a new head coach.

Kingsbury was never going to go into major detail about the opening in front of the media, and most people know that, but it didn’t stop folks on social media for sharing their reactions.

He didn’t deny it. https://t.co/yxwsYE5OSk

Translation: “I’m not shutting this down until the ink is dry on my extension.” https://t.co/K09KCiGrJN

Reporters putting coaches on the spot. You love to see it. https://t.co/n1kBdcYeVB

Kingsbury does have experience as a head coach in the Big 12 having coached six seasons at Texas Tech.