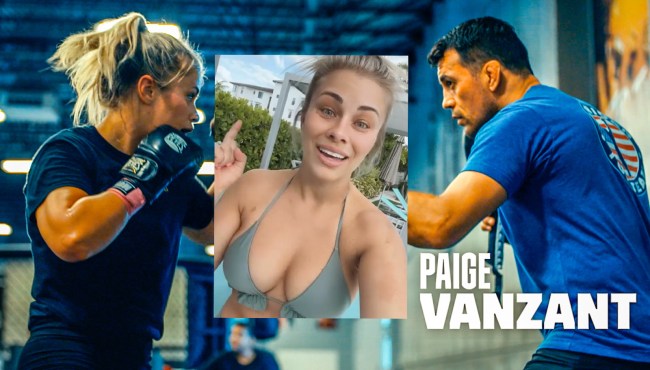 Welp, today’s the day, guys, with Bare Knuckle Fighting’s KnuckleMania starting in just a few hours. From the prelims — which are available to watch for FREE on YouTube starting at 8 p.m. EST — to the main fight cards and main event of Paige VanZant vs. Britain Hart starting at 9 p.m. EST, the entire event is going to be insane.

And with VanZant set to make her BKFC debut, you just know tons of sports fans will be tuning in. That’s why it’s important to know where to get the KnuckleMania live stream — with the event available on major platforms via PPV, as well as on FITE.TV.

For those who don’t know, Paige VanZant is an absolute star — and isn’t your traditional-looking bareknuckle fighter. After going 8-5 in her UFC career, the 26-year-old makes the shift to the Bare Knuckle Fighting Championship (BKFC) tonight, taking on a seasoned boxer in Britain Hart in KnuckleMania’s main event. Nobody knows for sure what’s in store, but you can bet it’ll be intense AF.

Bare Knuckle Fighting Championship (BKFC) is the first legally sanctioned and regulated bare knuckle event in the U.S. since 1889, so, yeah, it’s as no-holds barred at it gets. Dedicated to preserving the legacy of bare knuckle fighting, bouts are held in a revolutionary circular four-rope ring, which is purposely designed for fast-paced and exciting fights. And with each bout having fighters “Toe the Line” — which means starting every round face-to-face and just inches apart — the intensity is as high tense as it gets.

Fighters in BKFC are established pros from sports like boxing, MMA, kickboxing and Muay Thai, and are the only athletes able to compete. Each competitor is only allowed to wrap their hands within one-inch of the knuckle, so fights are as bare knuckle as it gets.

While this may be all new to both Paige VanZant and a few sports fans out there, there’s no denying this is as pure as it gets, with fighters scrapping it out as if they were in a street fight. And the only place for the KnuckleMania live stream is on major platforms via PPV, as well as on FITE.TV.

And while the VanZant-Hart bout is the headliner and most-anticipated given the popularity of the fighters involved, BKFC’s KnuckleMania has plenty of other tasty matchups to look forward to as well. Just take a look at the full slate below, which included the prelim fights (which are FREE to watch on YouTube).

With BKFC’s KnuckleMania live stream available on both PPV and FITE.TV, fans have a couple of different options to watch. The entire event is socially distanced, meaning limited fans will be in attendance. For those watching from home, though, the price of the event starts at $55 — which includes pre-fight analysis, the three scheduled fights and post-event reactions.

It’s a gigantic weekend to be a sports fan, and getting BKFC’s KnuckleMania live stream is the perfect appetizer for all the rest of the events going on in the next couple days. All the action starts at 8 p.m. EST with the event’s prelims on YouTube, followed by the main event at 9 p.m. EST, available via PPV and FITE.TV.

There are certain things you don’t want to miss as a sports fan, and KnuckleMania is one of those things. It’s sure to be a spectacle, so make sure to order the live stream to take in all the action.