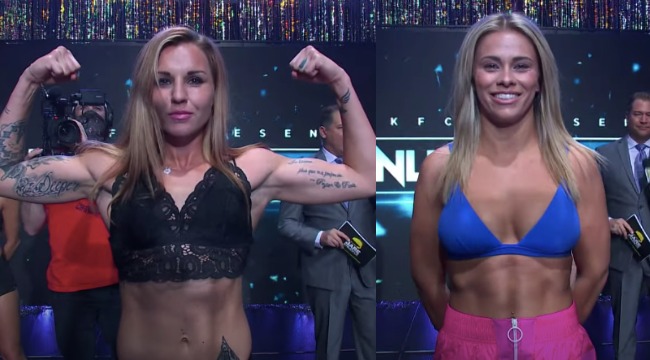 The day is upon us, folks.

After a seven year stint in the UFC, Paige VanZant is taking her iron fists and Valley girl face over to the fastest-growing sports league on the planet, Bare Knuckle Fighting Championship.

In her debut fight, the 26-year-old will be facing off against self-described Air Force brat Britain Hart tonight at Knucklemania, the promotion’s biggest event in history (you can BUY HERE on PPV). You can stream the prelim fights free on YouTube for a tasty appetizer.

Things got a bit FEISTY at today’s Knucklemania weigh-in, with VanZant taking grip of the 30-year-old Hart’s jugular and BKFC Founder Dave Feldman assuming the thankless position of stepping in.

The introductions began smoothly, with Hart taking on the alpha role with a flex, and Paige looking like she just stepped up to spell Esquamulose at the Scripps National Spelling Bee.

But if there’s one thing I’ve learned watching Paige, it’s to never judge a lady by her lip gloss and highlighter pink pants. That is one dangerous woman.

Former UFC star Chris The Crippler Leben will also be fighting his last professional fight EVER at Knucklemania tonight, if Paige wasn’t enough incentive for you.

What's it like to watch a @bareknucklefc fight? @ChrisLebenMMA & @TheHeroHenry break it down for us on Ep. 30 of @BroBible #EndlessHustle.

We chatted with Leben and his opponent, Quentin The Hero Henry, on our Endless Hustle Podcast, and you’re going to want to tune in for their matchup.