Kobe Bryant’s Advice For Dwight Howard For His Second Run With The Lakers? ‘Get Better’ 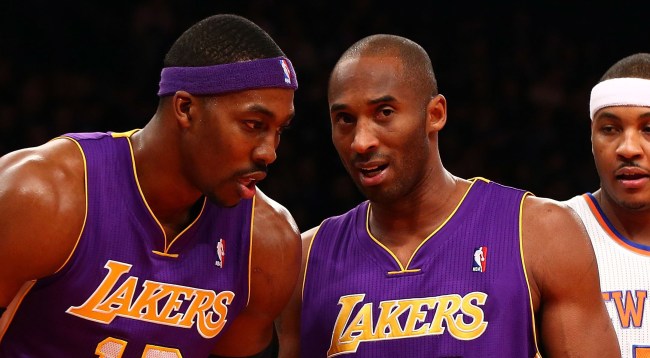 Now that all the dust has settled and Kobe and Shaq (mostly Shaq) have officially stopped clowning Dwight Howard in his return to the Lakers, the two former Showtime superstars have actually been willing to share some words of advice to 8-time NBA All-Star.

Shaq went first during an appearance on The Dan Patrick Show, saying, among other things, “If he does everything like he’s supposed to do – focus, no joking, no playing – just dig deep down and really, really want it, they could possibly win.”

During an appearance on The Talk this week, Kobe Bryant went a step further saying he believes that this time around Dwight Howard is “ready” to play for the Lakers, and he too offered the 33-year-old NBA veteran some advice for his second go-round in La La Land.

“The first time we played together, the first half of the season was really tough,” said Bryant. “The second half we ended up playing the best basketball of any team in the league, and then unfortunately I tore my Achilles. But I think he’s ready for this next time around to do whatever is necessary to help the team be successful, and I think he’ll do it.”

Based on the physique Howard showed off recently, it would appear that he has definitely been putting in some kind of work.

Whether that translates to the court for the Lakers remains to be seen. (That hair, though…)

Mamba also briefly touched on the rumor that he once asked the Navy SEALs to waterboard him.

“If it happened, let’s just say it won’t happen again,” Kobe said, trying to deflect having to admit he did it.