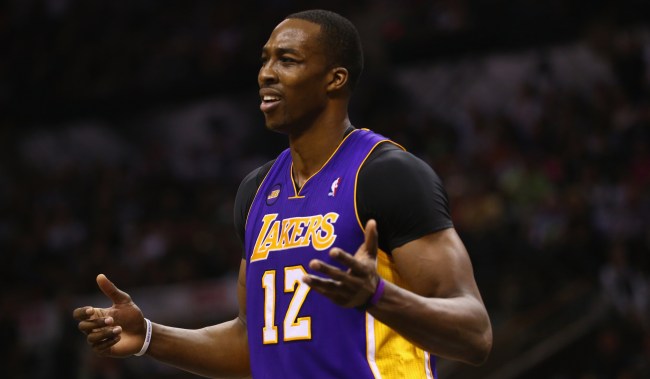 When Dwight Howard woke up Monday morning he certainly had no idea that, thanks to a response given by Kobe Bryant during a relatively obscure interview, his week would be filled with ridicule and trolling.

Somehow, Bryant claiming he “would’ve had f**king 12 rings” if Shaq wasn’t a “lazy ass” turned into “Roast Dwight Howard Week” when O’Neal decided to clap back at Mamba about not passing the ball more, especially in the Finals.

That testy interaction led to Kobe and Shaq feeling the need to clarifiy for the sports world that there really is no beef between them, which in turn led to Shaq sideswiping his long-time nemesis Dwight Howard.

And that all came after the Diesel clowned Dwight during an interview with TMZ on Monday when Shaq pretended to not know who Howard is.

On Thursday, Howard finally responded, calling anything O’Neal had to say about him “irrelevant” and saying “don’t talk to me about what anybody else said about me.”

Following Howard’s response, Shaq appeared on The Dan Patrick Show and actually dialed back his trolling of DH12 for a few minutes to offer the veteran center some advice for his upcoming season back in L.A.

“In Miami, I was 34, same as Dwight. On my way out. People thought I was washed up when I left LA, but I dug deep down. I said ‘you know what? I can do this.’ If he does everything like he’s supposed to do – focus, no joking, no playing – just dig deep down and really, really want it, they could possibly win.”

Now if only there was some way to get Shaq’s message to Howard without anyone talking to him about what anybody said about him.

Shaq also re-confirmed that he has no beef with Kobe… by talking about his own stats.