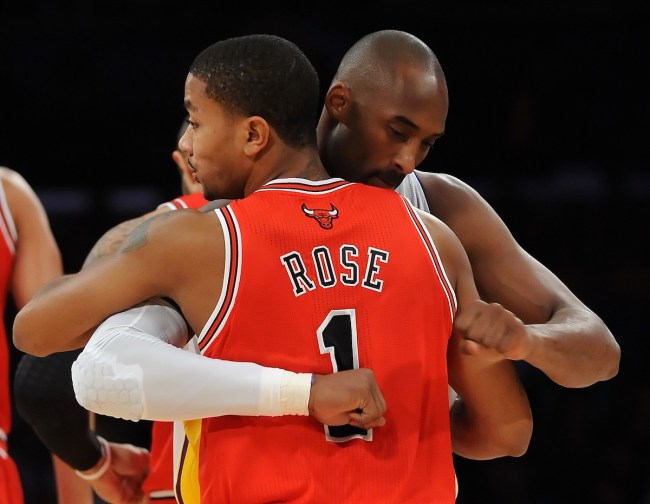 When Kobe Bryant tragically died with seven others in a helicopter crash in January of 2020, the entire world was shook. Not only was Bryant an all-timer on the hardwood, but he was impacting millions through his “Mamba Mentality” after his basketball life, and inspiring people to dig deeper, push harder and dream big to reach their goals. It seems like every athlete had some story about Bryant helping them in their athletic journey.

The belief that Kobe had in others was incredible. Sure, there aren’t too many people who can be as obsessed with their craft as he was, but he still tried to encourage them that, deep down, they could be. And whether it was that faith or something else, Bryant allegedly never gave up on former NBA MVP Derrick Rose — who has dealt with a lot of adversity since being the top pick in the 2008 NBA Draft.

According to ESPN’s Ramona Shelburne, Kobe Bryant believed so much in Derrick Rose that, prior to his devastating death, he pushed the Lakers to trade for the former No. 1 overall pick last season.

Shelburne, appearing on the Brian Windhorst & The Hoop Collective podcast, said this was the only time she’s heard of a time when Bryant suggested to the Lakers’ front office in making such a deal. That’s high praise for Rose, assuming it was the only (or one of the only) instances the legend chimed in.

Kobe Bryant was infamous for pushing his teammates during practice, and mocking them if they didn’t give 100 percent on the floor, so for him to suggest to the Lakers that Derrick Rose had the chops to play for the iconic franchise speaks volumes to his respect for the point guard. There’s no denying the playmaking Rose would’ve added a different dynamic to the Lakers last season.

In the end, the Lakers didn’t make a deal for Rose, and, in fact, may not have needed his services considering they won the NBA title without him. But Bryant’s suggestion to the front office was all before the pandemic and abbreviated season, so who knows what could’ve happened had fate gone a different way.

Rose, only 32 years old, was recently traded to the New York Knicks, and is still looking for his first NBA title. Had Kobe Bryant been capable of influencing the Lakers enough last season, the point guard may have already gotten his ring.