Kobe Bryant On What He Thinks Of LeBron James Joining The Lakers, What Lonzo Ball Can Learn, And More 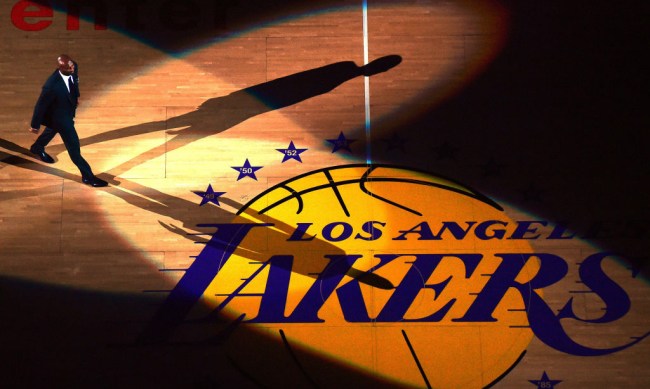 One of, if not the first thing, people wanted to know when LeBron James signed to play for the Los Angeles Lakers was, “What does Kobe Bryant think?”

It was a reasonable question considering the fact that Kobe is the latest in a long line of Lakers superstars to capture the imaginations of the NBA nation.

Now, thanks to a recent conversation with Rich Eisen, we do, in fact, know what Kobe Bryant thinks.

First off, Bryant doesn’t get how any Lakers fan could possibly be opposed to LeBron joining the Lakers, telling Eisen, “If you’re a fan of mine, you’re a fan of winning. You’re a fan of the Lakers. I bleed purple and gold, so that’s above anything else. I have been a Lakers fan since I was yay high. That is never going to change. Right? [It] is about winning championships. So, they’ll fall in line.”

As for the inevitable comparisons between himself and James, Kobe said, “To make any comparisons of LeBron being viewed in the same vein as me doesn’t make sense. The goal is always to win championships. That’s LeBron’s Goal.”

Bryant continued, “I don’t know, making the comparison of him being viewed in the similar vein as me, that doesn’t make much sense. I think the goal is always to win championships. No matter where you go, that is the goal. And that is his goal, that is Rob’s [Pelinka] goal, that is Magic’s goal, Jeanie’s goal, Rondo, all the guys, Kuzma, Lonzo, they all want to win championships. That is what they are gunning for.

Speaking of players like Rondo and Ball, Kobe thinks Lonzo could learn a thing or two from the veteran point guard, regardless of what Ball’s dad thinks.

“Rondo is a student of the game. How he studies the game is something he can learn from,” expressed Bryant. “Rondo will sit there and watch film for hours and hours and hours and will dissect and pick things apart to the smallest of detail. Also how he facilitates the game, how he reads things happening before they actually happen. How you can manipulate the defense to make things happen. And also defensively, he gets after you. So I think it’s great.”

As for whether there was any grain of truth to the rumors he was going to come out of retirement? Yeah, that’s a no.

“When I retired, everybody was saying, ‘He’s too competitive. He’s not going to know what to do with himself. He’s going to have to come back.’ I took that as a personal challenge of them thinking I’m this one-dimensional person. That all I know is to dribble the ball, shoot the ball, play basketball and compete at that level,” he explained to Eisen. “So I took that as a personal challenge. I will never come back to the game. Ever. I’m here to show people we (athletes) can do much more than that.”

Watch a few more segments from Bryant’s interview or watch the entire thing in one fell swoop below.