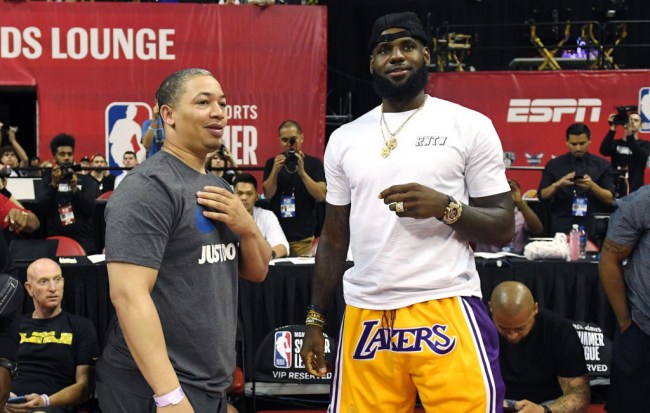 I might lack the talents of an actual NBA scout, but after a close and careful examination of the evidence available to me, I have come to one conclusion: LeBron James is very, very good at basketball. As a result, you’d think every Lakers fan in existence would have been thrilled when The King announced he’d be taking his talents to Los Angeles, but it appears not everyone is exactly thrilled about James joining the squad.

For some reason I still can’t manage to wrap my head around, there’s a contingent of Lakers fans who are genuinely pissed off that LeBron decided to head to the West Coast for the twilight of his career. It seems more than a few people feel LeBron is somehow tarnishing the legacy of Lakers legends by joining the team— like the guy who repeatedly threw his shoe at a cutout of James’ face that was plastered over a mural of Kobe Bryant.

James got his very own mural shortly after The Decision 3.0 but the paint had barely dried before someone defaced it to claim a $300 bounty. The graffiti was quickly erased but someone else decided to splatter it with paint and the artist brought the saga to an end by deciding to cover up the entire thing.

However, For The Win notes a new mural has been erected in LA that should do a better job of avoiding the wrath of inexplicably salty Lakers fans.

The mural features LeBron looking up at Kobe, Shaq, Magic Johnson, Kareem Abdul-Jabbar, and Wilt Chamberlin as they show off some of the many championship trophies they brought to LA over the course of their career.

NOW THIS IS A LAKERS MURAL! pic.twitter.com/xvgnEsJqnv

Take that, I guess?