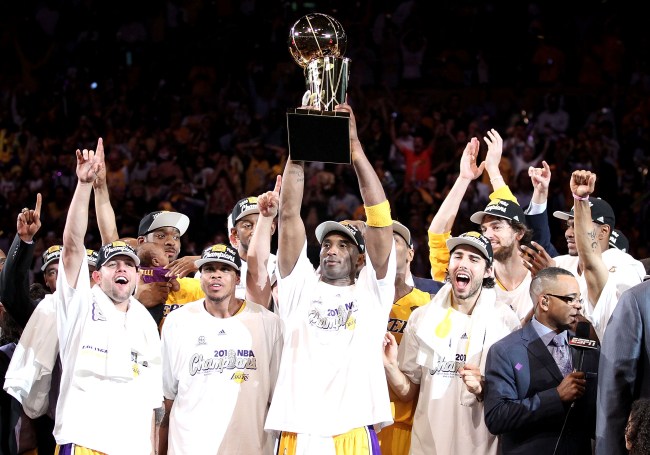 Kobe Bryant is perceived as one of the best shooting guards in NBA history. In fact, outside of Michael Jordan, the Los Angeles Lakers legend might be No. 2 on the all-time list at the position, as his illustrious career was defined by memorable moments and, the most important thing, five championships.

While Bryant didn’t receive all the individual accolades that the GOAT did — “only” winning one league MVP award — the fact that he won a handful of rings and finished his career in the top-5 on the league’s all-time scoring list sure helps him make the argument that he’d be the Sixth Man on the most legendary team ever. That’s just my personal opinion.

Here’s the thing, though, while Kobe Bryant has earned that distinction, had he not won a couple of titles without the help of the most dominant man in NBA history, Shaquille O’Neal, some may strip down the aura around Bryant’s all-time greatness. After all, in many critics’ eyes, a superstar needs to win a title with a supporting cast made of All-Stars, not all-timers, which is why Kobe knew it was so important to get at least one on his own to prove to everyone he had that “it” factor.

As a guest on the Knuckleheads podcast earlier this week, Kobe Bryant told former NBA players Quentin Richardson and Darius Miles one of the reasons why he was encouraged by the idea of he and Shaq going their separate ways following the 2003-04 season — which ended years of internal drama following a shocking loss in the NBA Finals to the Detroit Pistons. Here’s what Bryant had to say.

“Here is the thing. I get chastised a lot for being selfish, saying we just got to fit into a team, it’s about winning championships,” said Bryant. “I get it, I’m doing it, right? We won three straight. I got it. But I also knew that when my career’s over they’re going to chastise me for the same thing: ‘Oh well, you’re only great because you played with Shaq.’ I’m like, ‘Whoa, hold up. You can’t have it both ways, bro?’ You know?”

“So it was important for me and Shaq to go separate ways because I didn’t want people to use that against me — they still do — but it was important that I win championships without him,” Bryant continued. “And you get a glimpse of what I could have done individually had I not played with him. See what I’m saying? So that was a big driving factor. It was like, ‘Hold on, don’t get it f***ed up now.’ Like, I’m doing this thing, I’m playing with Shaq, it’s like — take Mike put him with Wilt — Shaq was a force of nature, right? So you’ve kind of take a back seat.”

These are all great points by Kobe Bryant, because, he’s right, everyone looked at Bryant as the sidekick to Shaq during the Lakers’ three-peat from 2000-03, immediately putting the “Robin” label on him. While that may have been accurate at the time, Bryant knew he had superstardom in himself, and, whether purely ego or otherwise, wanted to prove he could win at least one ring without O’Neal.

This is all pretty interesting stuff from Bryant, who, not long ago, joked that he and Shaq could’ve won 12 NBA titles had the big man had Bryant’s work ethic. It caused their infamous feud to sort of come back into the limelight a bit, before each laughed it off. Either way, the fact that it was Kobe who wanted Shaq gone 15 years ago proves how determined he was — and how much he cared about — his overall legacy when all was said and done. Winning more with O’Neal wasn’t going to get him that individual glory or recognition.

Look, Scottie Pippen couldn’t win without Jordan. Kevin Durant couldn’t win without Steph Curry. LeBron James couldn’t win his first two without Dwyane Wade. Every superstar gets chastised throughout their careers until they win at least one championship, and, to Kobe Bryant’s point, he wanted to end any debate about his all-time greatness by showing everyone that he could do it as lead dog — which he did twice following Shaquille O’Neal’s trade to the Miami Heat in 2004.