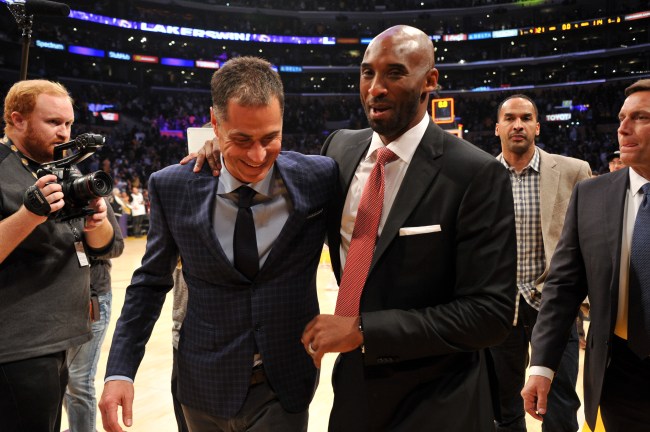 “A single lie discovered is enough to create doubt in every truth expressed.”

Lakers GM Rob Pelinka was mocked and flat-out called a liar in May after feeling the need to fabricate a story about Kobe Bryant meeting Heath Ledger for dinner to extract a psychopathic, killer mindset in the wake of Ledger’s legendary Joker performance  (video of Pelinka’s fib here). Kobe, as the story goes, would go on to score 61 at Madison Square Garden after the meeting with a dead guy.

What the Lakers GM failed to consider was that the internet always digs up the truth. Especially if it’s as easy as recognizing the man in question had been dead for over a year. The reactions birthed from this weird saga were incredible.

“So what did Kobe and Heath Ledger eat at their dinner that never happened?”

Heath Ledger on his way to the dinner with Kobe that Rob Pelinka set up pic.twitter.com/BhHxu3EBXC

rob pelinka lacing them up before work pic.twitter.com/7OtX4vWfFc

Bryant spoke about the quote-unquote mixup in a recent appearance on Quentin Richardson and Darius Miles’s podcast, saying:

I had to find that space. I didn’t go out to dinner in New York. I stayed in my room. This is actually the story Rob told, that he got confused about, the Heath Ledger stuff. Because I stayed up watching Batman, and watching Heath Ledger. And then I went and started researching about Heath Ledger, and how he got into character and how he just became all-consuming. That inspired me to go into my Garden mode. When I go in there I don’t want to say hi to the gen—I don’t want say hi to these people—I don’t wanna talk to nobody. Everybody leave me alone.

It’s almost worse if Pelinka was just ‘confused’ about the details. If Kobe Bryant met with Heath Ledger to gleam anything at all about his mindset for one of the greatest performances in cinematic history, I would handcuff Kobe to a radiator and not let him go until he told me everything.

Heath Ledger if he was able to confront Rob Pelinka about his joke of a lie he just told about him… pic.twitter.com/53Ih67EUUN

P.S. Kobe totally told Pelinka to lie about him meeting Ledger to play up the whole ‘I’m a ruthless assassin’ label Kobe loves to tout so much.