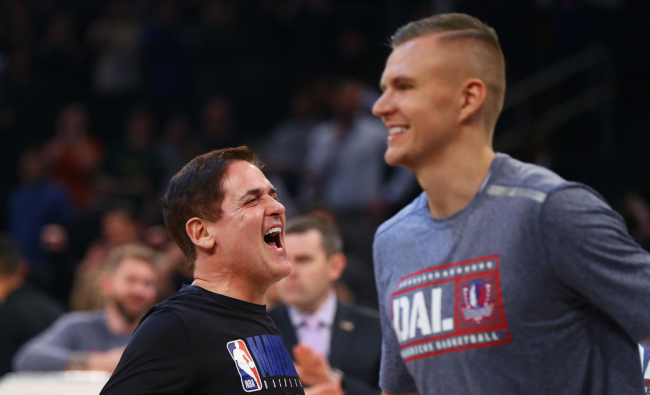 Kristaps Porzingis is the newest name to enter NBA trade rumors and Mavericks’ owner Mark Cuban is not happy about it.

Bleacher Report recently published a report suggesting that the Mavericks have “quietly gauged the trade marker” for Porzingis.

“They’ve definitely sniffed around on him,” an NBA assistant general manager told Bleacher Report. “They’re taking the temperature, because they know at some point it’s gonna come around.”

Cuban didn’t take long to respond to the report immediately striking down the rumors telling Brad Townsend of the Dallas Morning News that the report is “not accurate” and that Dallas has “not discussed him in a trade at all. [That] has not happened.”

The simple fact that there are rumors attached to Porzingis’ name isn’t the only frustrating aspect for Cuban. The report also quoted an anonymous Western Conference executive calling out Porzingis and his lack of ability on defense.

“It looks like it’s impossible for him to get in a stance. He looks like a scarecrow out there,” one Western Conference executive said. “You don’t expect him to necessarily be great from the jump, but I’ve watched Porzingis a couple of times this year, and I’m not sure the guy can guard anybody.”

Cuban took offense to that and let Townsend know his opinion of the matter via text message.

“And BTW, we are not happy that there is a supposed ‘Western Conference exec’ ripping on one of our players,” Cuban’s message read. “There is no trade discussion. I think they just used it as a way to put out there what they think of KP.”

Cuban is obviously going to stand up for his players no matter what any execs may say about them. What we have here is another NBA drama flash in the pan and the only thing that we actually know is true here is that Cuban is upset about these rumors and reports. Could Porzingis be on the trading block? Sure, but we’ll learn about it from the regular culprits on Twitter if it is legitimate.