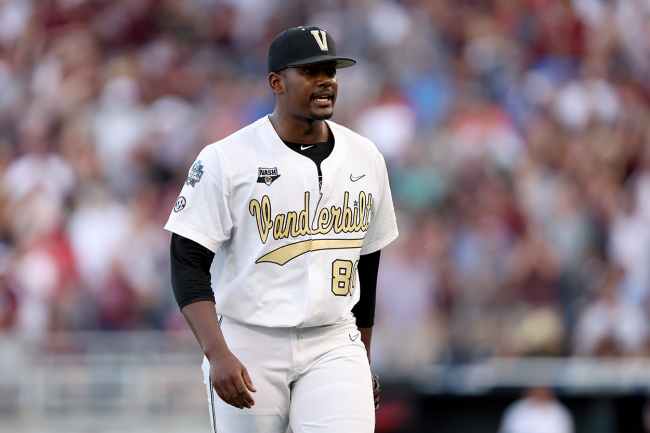 The New York Mets appear to have made a mistake by passing on former Vanderbilt pitcher Kumar Rocker. He is only two starts into his professional career in an independent league, but he’s looking really good so far.

Rocker, who was Vanderbilt’s ace in 2020, was the Commodores’ secondary ace alongside Jack Leiter in 2021. The duo absolutely ripped up the SEC.

Because of their strong seasons, Leiter went No. 2 overall and Rocker went No. 10 overall to the Mets. However, he is not currently playing for New York, nor is he in the team’s minor league system.

Rocker and the Mets had verbally agreed on a $6 million signing bonus— which is $1.4 million above the slot value for the No. 10 pick. But the team decided not to make him an official offer after reviewing his medical information and received a compensatory pick in the 2022 MLB Draft.

Scott Boras, one of the top agents in the nation, represents Rocker and disputed New York’s claim. The team also released a statement.

Mets GM Zack Scott on Rocker: “This is clearly not the outcome we had hoped for and wish Kumar nothing but success moving forward. We’re excited about the players we have signed and look forward to watching them develop and contribute to the organization in the years to come.”

Regardless of what the truth might be in regard to Rocker’s health, he did not sign with an MLB team and he did not return to Vanderbilt. He is currently playing independent ball in the Frontier League.

His first start with the Tri-City ValleyCats went well. Rocker allowed two runs on three hits (a two-run home run scored the runs), threw 43 of 60 pitches for strikes, struck out six and did not allow a walk in four innings.

After a solid debut, Rocker followed it up with another short, but strong start on Friday.

He threw 47 pitches in three scoreless innings, with 32 strikes. Rocker allowed two hits and struck out five, including the side in the third inning.

Once again, his numbers were in the same range. He was pumping gas.

Kumar Rocker and the ValleyCats Pitching Staff were #LightingUptheRadar with @wolbergelectric all night long!

The fastest pitch of the night belongs to Kumar Rocker at a speed of 97.3 MPH!#VamosGatos #Forthe518 pic.twitter.com/5mZQEabLtW

Rocker’s health does not appear to be a concern through his first two starts. If he keeps this up, the Mets will look mighty silly.