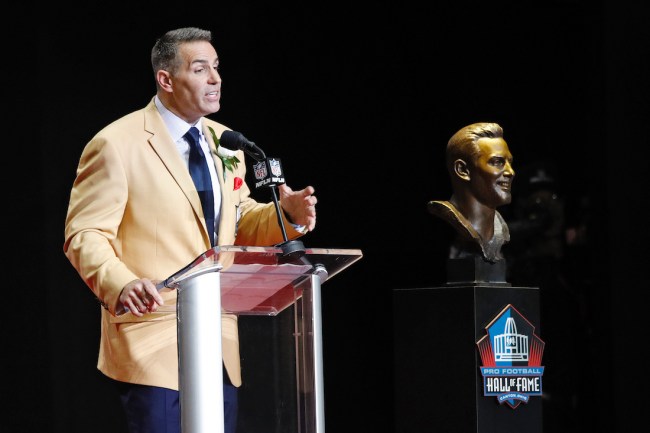 You see that picture of Kurt Warner above? Yeah, it’s him giving a speech during his induction into the Pro Football Hall of Fame in 2017. Given the fact that the former quarterback was literally stocking groceries to make ends meet about 20 years before this, it’s absolutely remarkable to think that Warner ended up in this position, wearing a gold jacket and getting himself a bust in Canton.

The story of the two-time NFL MVP is well-known by now. One-year starter at Northern Iowa in college. Undrafted by the NFL. Worked at a grocery store. Played in the Arena Football League. Got his chance with the St. Louis Rams after an injury to the starter, Trent Green, and led the team to a Super Bowl win his first year as a starter. That’s a legit unbelievable journey.

One thing many people don’t know about Kurt Warner’s NFL story, though? That he could have been doing it all for the Chicago Bears had a freak accident not happened.

Making the Super Bowl media rounds this week, the Hall of Fame signal-caller joined the Pardon My Take podcast to talk shop. The conversation veered towards his career, and a story about how a spider bite in 1997 held him back from trying out for the Bears. Warner confirmed it was true — and, in doing so, broke the hearts of every single fan who has ever uttered the words “Da Bears.”

The reason @kurt13warner's career never made a stop in Chicago is very unfortunate for Bears fans. pic.twitter.com/P8lxRDJDAQ

Now, look, I’m no Bears fan, but hearing Kurt Warner tell this story even hurts my soul. It’s one thing to have your favorite team miss out on a free agent in the 11th hour, or choose the wrong guy in a draft. But to think that a Hall of Fame quarterback who was desperate for an opportunity to live out his NFL dream couldn’t workout for Chicago because of a freak spider bite is a tough pill to swallow. That’s like some serious football-gods-hate-us kind of stuff.

Over the course of his career, Warner threw for over 32,000 passing yards, had 208 touchdowns, had a passer rating of 93.7, and reached the Super Bowl three times (winning one). The Chicago Bears haven’t hoisted the Lombardi Trophy since 1985, and have been on the hunt for a franchise quarterback since… well, 1985.

Had one little spider not bit Kurt Warner before his workout, who knows if the entire history of the Bears would’ve been different. It’s one things fans probably wish they could go back in time to find out.