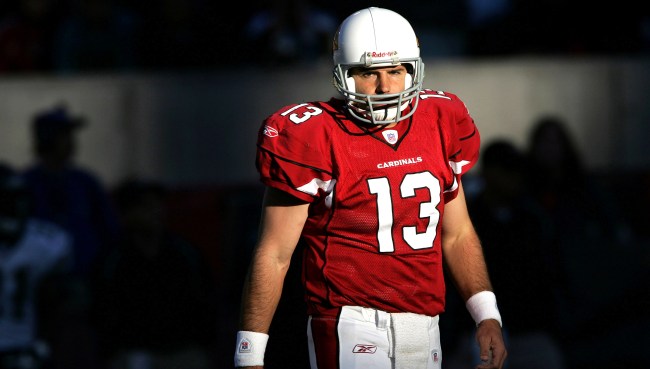 Hall of Fame quarterback Kurt Warner says he seriously considered coming out of retirement to play for the Arizona Cardinals in 2018. He had last played in the NFL in 2009.

After going 13-3 and losing the NFC Championship to the Carolina Panthers in the 2015 NFL playoffs, the Cardinals were in freefall by the 2018 season rolled around and had the franchise’s worst season since 2000, going a pitiful 3-13 with new acquisitions Sam Bradford, Josh Rosen and Mike Glennon starting at quarterback.

Bradford played in three games before being released. Rosen played that one year then went to Miami where he was benched in favor of Ryan Fitzpatrick. And Mike Glennon… well, he’s Mike Glennon – the man who has made over $29 MILLION for throwing just 801 passes in his seven year NFL career.

Cardinals wound up paying QB Sam Bradford a $10 million signing bonus, about $2.5 million in base salary and another $1 million in playtime bonuses – a total of $13.5 million for playing three games.

So, yeah, Kurt Warner, who was inducted into the Pro Football Hall of Fame in 2017, coming back and playing for the Cardinals in 2018 couldn’t have been much worse than Arizona’s other options.

Sadly, the Cardinals weren’t that interested in a 47-year-old who hadn’t played for nine years, Warner explained on Arizona Sports 98.7 FM last week.

“I thought about it,” Warner told the Doug & Wolf show. “I honestly went out back and started throwing the football. And you know, I was already in pretty good shape.”

Warner continued, “I would have definitely considered it, you know, had they been interested first. And second, you know, I really felt I was back in shape to the point to be able to help the team. So yeah, it’s definitely something, you know, that wasn’t just throwing it out there haphazardly, you know? It was something I highly considered and probably would have at least explored had they shown interest in doing that.”

How awesome a spectacle would that have been?

Last year the Cardinals paid Sam Bradford $16 million, paid Mike Glennon $5 million, and traded their first-, third- and fifth-round picks to move up for Josh Rosen. Bradford and Glennon are gone and now Rosen will be pushed aside for Kyler Murray.

It’s not like Warner was stinking the joint up when he retired. During his final season in Arizona, the Cardinals went 10–5 and Warner passed for 3,753 yards, completing 66.1% of his 501 passes with 26 touchdowns and 14 interceptions for a 93.2 QB rating which was only a hair below his career mark of 93.7.