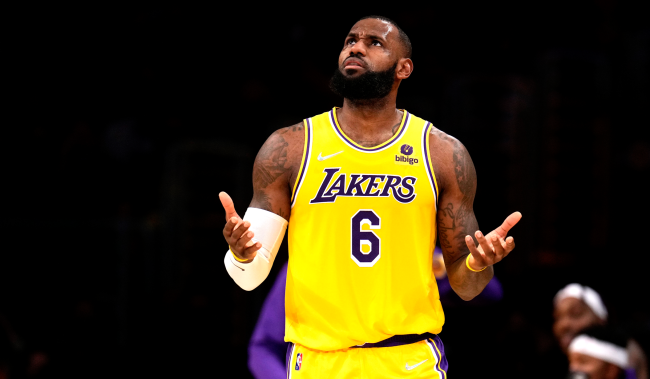 If there is one thing we know for certain about the NBA these days it’s that the number one overall pick in the 2001 NBA draft, Kwame Brown, will have an opinion on it.

Those opinions may not be justified or correct, but Kwame Brown has them and is more than willing to share them.

Related: Kwame Brown Goes Off On Russell Westbrook For Wearing A Skirt In Profanity-Laced Rant

Kwame Brown, who parlayed his career 6.6 points per game average into over $63 million in earnings over 12 NBA seasons, recently expressed one of those opinions while discussing the Los Angeles Lakers’ struggles.

“So they keep this story line with the Lakers that’s really not a story line… they suck,” said Brown.

“Phoenix Suns and Golden State, Denver and Utah, those are the teams to watch out west,” he continued. “Denver has one of the best big men in the league.

“The Clippers f—ed around and beat the Lakers? That’s some of the stuff, man RIP Kobe, one thing about Kobe he didn’t do the type of friendly s–t with you after a loss like that. After a loss like that, you better… when he sees you again, your a– better be on the court. You better not be in the training room. You better not be getting your ankles taped. Your a– need to be out there shooting some shots or Kobe going to be on your a—.

“And that’s what I think the Lakers are missing. They’re missing that leadership. Everyone’s so friendly, they’re slapping hands. That’s not what the game is about. It ain’t about you having your homeboy next to you. It’s about having that guy that you can correct and he’s going to respect because you’re out there to do a job.

“And that’s one thing about Kobe. He’ll be your friend, sometimes. But when you’re a– ain’t doing your job, foot going up your a–.

“He set the tone in practice. You’re not having games like that,” Kwame Brown explained. “He’s setting the tone in practice and n—-s ain’t coming into the game the next game wearing these little sweaters and doing anything that’s going to distract away from the team.

“There’s no way you’re going to be on the team with a guy like Kobe and you lose to a team that you’re not supposed to lose to and you’re going to come in with a crazya– outfit that’s going to detract away from the game. Your a– better in all black. You better have a black tie and a white shirt or the Mamba’s going to whip your a–.

“So that’s the difference I see with the Lakers. It’s just poor leadership, everybody want to be friends, and somebody’s got to stand up and say, okay, if it’s AD’s team then its AD’s team. If you’re going to let LeBron be the leader still, which his resume says so, but his age says different, and a lot of people can’t let go. It’s a sad thing to see when an older player can’t let go.”

Kwame Brown’s thoughts on the current Lakers’ situation, as well as their leadership. He believes that the Lakers are missing Kobe Bryant-type leadership