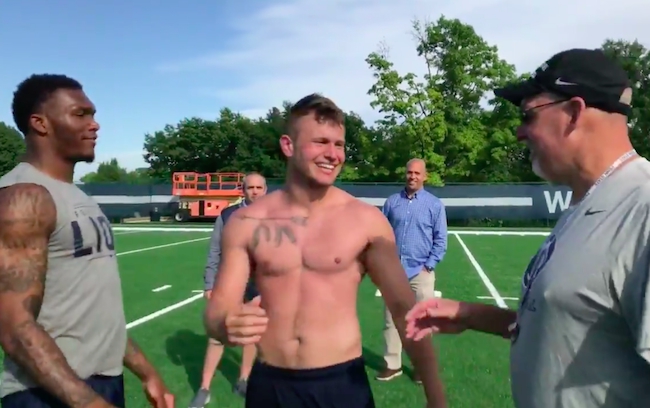 Even if you have a scholarship, it can be hard to handle life as a college athlete. If you play a sport, you have to balance your training and games with your classes while still having enough money to ensure you have a constant supply of light beer and bottom-shelf vodka like every normal college student should. However, it’s even harder for walk-on players, many of who are forced to kiss most of their social lives farewell in order to get by.

This was the case of Penn State long snapper Kyle Vasey, who started every game for the Nittany Lions in 2017. He was brave enough to get a job as a barback and a bouncer in a college town, where he’s spent the majority of his weeks working from 8 PM to 3 AM to support himself.

Thankfully, James Franklin decided to treat the internet to the feel-good video we all need by surprising the senior during practice on Monday. After asking which of his players were currently working a job on the side, Vasey piped up and explained his situation, which resulted in Franklin telling him to quit because he’d been given a scholarship for his final season.

If you want to make a journey down the surprise scholarship rabbit hole, here are a couple of places where you might want to start. The internet might usually be a terrible place, but at least it gives us videos like this.