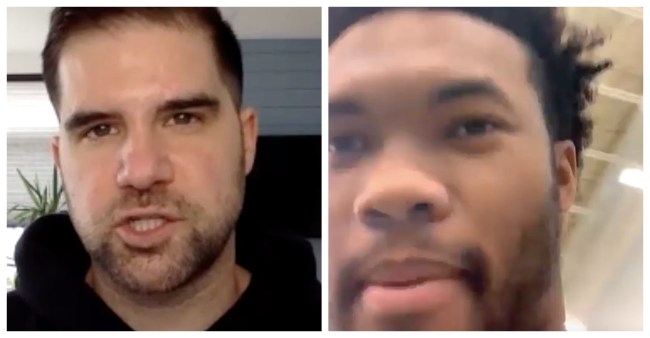 You don’t need to be a rocket scientist to know that Kyler Murray of the Arizona Cardinals is an absolute athletic freak of nature. Not only is the quarterback fast with a rocket arm, but he makes plays where others just can’t, using his escapability and agility to extend (and make) big plays.

Standing just 5’10”, Murray doesn’t fit the “prototypical” quarterback mold that many scouts may still use. But you know what? The guy won a Heisman Trophy while playing for the Oklahoma Sooners, was the first overall pick in the 2019 NFL Draft, is so talented that he was a top-10 pick in the MLB Draft (2018) and is, generally speaking, perceived to be one of the best athletes on the planet.

Given his dominance in football — where he earned the NFL’s Offensive Rookie of the Year Award in 2019 — as well as his prowess on the baseball field, it’s natural for some people to compare him to another two-sport star, Bo Jackson. But does Kyler Murray really think he and Bo know the same skills? I got to talk with him courtesy of BODYARMOR EDGE to get his take, along with a bunch of other pretty cool stuff.

Among the things Kyler and I talked about included his relationship with BODYARMOR, when he realized his athletic talents were just a little better than his peers, and if he really thinks he could play in the NBA with a couple more inches. Take a look below at the video.

Now, I know Kyler Murray is a superb athlete, but the fact that he thinks he could possibly get Ja Morant (last year’s NBA Rookie of the Year) shows just how confident he is in himself. Not only that, but, with a couple more inches, he really believes he’d be in the league. Guys, would anybody doubt him given his history in other sports? It’d be foolish to do so.

As for his relationship with BODYARMOR EDGE, Kyler mentioned how important it is to get his fuel and clean energy prior to a workout, practice or game.

“Whether I’m heading to a practice, a game, or just getting my day started, I’m always looking for an extra boost – and BODYARMOR EDGE is now my go-to,” said football star Kyler Murray. “It gives me the hydration that I need throughout the day and also gives me that added boost of natural caffeine to take my game to the next level.”

Thanks to BODYARMOR EDGE’s combination of premium hydration + natural caffeine to give the boost you need on and off the field, it’s no wonder the brand aligned itself with two of the best, young, most dynamic athletes on the planet: Kyler Murray and Ja Morant. That’s why the new ad spot (seen below) was created, showing each superstar dominating in their collective sport — with a cool twist, as each transforms into a cartoon or video game-like character. Check it out below.

Developed with the same coconut water-based formula as BODYARMOR Sports Drink, BODYARMOR EDGE provides more than 1,000mg of hydrating electrolytes plus 100mg of natural caffeine. It comes in a 20.2oz bottle and contains natural caffeine & electrolytes, contains antioxidants, B-vitamins, natural flavors and sweeteners with no colors from artificial sources.

Considering Kyler Murray and Ja Morant take this before a workout, practice and/or game, I’d say it’s something worth grabbing yourself when looking to dominate the day. So make sure to scoop your favorite flavor up stat!