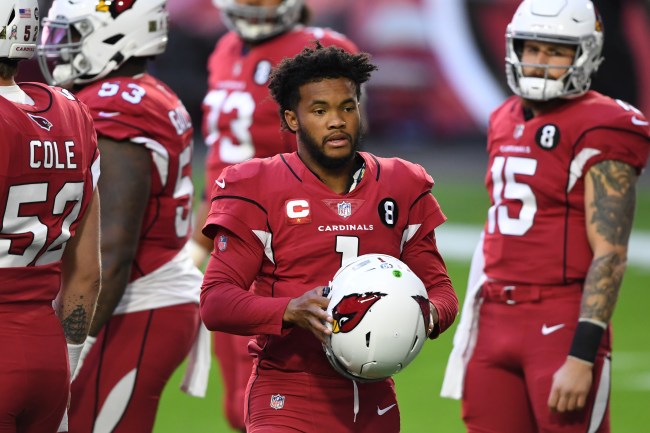 Arizona Cardinals star Kyler Murray is a bona fide MVP candidate, with the second-year quarterback putting up wild numbers so far this NFL season that shows why he was taken No. 1 overall in the 2019 NFL Draft. And one thing that separates Murray from his peers is his freak athleticism, which was on full display during a Week 10 contest against the Buffalo Bills when he rolled left, outran defenders, and threw an off-balanced throw to the end zone for a game-winning Hail Mary.

There aren’t too many people on planet earth who could’ve pulled that play off — and Kyler Murray knows this. It’s because of that rare ability that has the 23-year-old thinking even bigger. Not just on the football field, but on the baseball field again, too.

As most of us probably remember, Murray was a phenomenal baseball player before focusing his attention on football. Hell, he was drafted No. 9 overall by the Oakland A’s in the 2018 MLB Draft before being the top choice in the NFL Draft the following year. There was debate then about the dude trying to become a dual-sport athlete, but, given his position and the demands of playing quarterback, the chatter quickly evaporated. But that doesn’t mean Kyler’s giving up on the dream.

Appearing on the Tiki And Tierney radio show Wednesday morning, Kyler Murray said that he’s still considering a way to play in both the NFL and MLB one day, even joking that his next football contract may give him some leverage to possibly negotiate such an opportunity.

"Yea, I miss baseball for sure but I know I'm where I'm supposed to be. I definitely feel like I could (do both). I never say never… (after my next contract) I'll definitely have some wiggle room"@K1 leaves the door open for a return to baseballhttps://t.co/hDGjUlE9jA pic.twitter.com/RHGDK7kWzM

First off, let’s be honest: There’s no way in hell the Arizona Cardinals are allowing Kyler Murray to sniff professional baseball again. Sure, he’s inclined to stand his ground come contract time, but if he keeps ascending like he has so far, they’ll make sure there’s language written in his next deal that prohibits baseball.

Second, how amazing is it that Murray can even consider doing this? What sort of deal with the devil did he sign to get blessed with such athletic prowess, and, more importantly, why couldn’t I have been handed the same option? Not only is he tearing it up in football, but now he’s talking about trying to play in both the NFL and MLB? C’mon, man!

Murray admitted on the Tiki And Tierney show that, as much as he misses baseball, he’s in the place he’s supposed to be… for now. Will that change in a few years when it’s time to talk contract extension? Who knows. But it’s wild to think the kid is still holding out up that, one day, he may suit up in the majors.