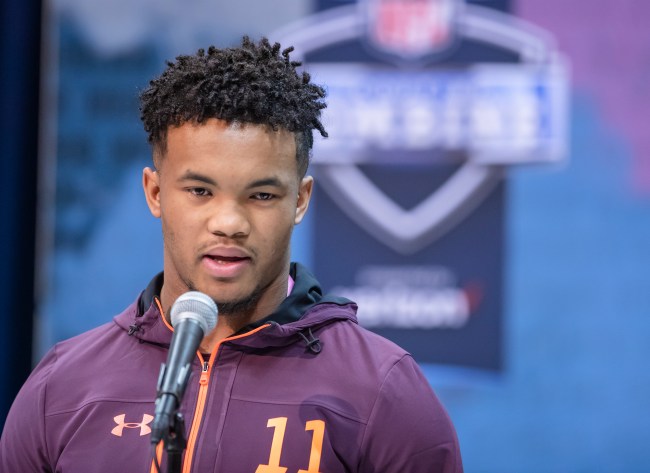 Kyler Murray is probably going to be the No. 1 overall pick in this month’s NFL Draft. Just typing that is insane, because, less than a year ago, the kid was being drafted No. 9 overall in the 2018 MLB Draft by the Oakland Athletics, who immediately signed him to a $4.6 million contract. In that deal, the MLB team agreed to let Murray play college football, which he did pretty damn well, as the former Oklahoma Sooners quarterback guided his team to the College Football Playoff and won the Heisman Trophy. Not too bad of a year for Kyler Murray, huh?

Thing is, because of the season Kyler Murray had with the Sooners, it led him to rethink this whole baseball thing, making him wonder if trying to play in the NFL was the way to go. After lots of deliberating and back-and-forth in his mind, Murray decided that it was the NFL he wanted to go for, taking to Twitter back in February to formally announce how he landed on the decision.

But because we can’t get enough of a freak athlete like Kyler Murray, especially in the weeks leading up to this year’s NFL Draft, there’s a new report that says the Oakland A’s went all in with one last effort to keep Murray from choosing the NFL over the MLB. Naturally, they threw more money at him. As in, lots and lots of money, because, per SI.com, the A’s offered Kyler Murray an additional $14 million to stick with baseball. Yes, you read that right, the extra cash was in addition to the $4.6 million the team had already given him, but the team knew they needed to make a splash considering Kyler Murray could be in line for more than $30 million in guaranteed money should he be selected No. 1 overall in the NFL Draft.

The report comes from a profile on Kyler Murray by Robert Klemko, which details what the A’s would have had to do in order to keep Murray in baseball. In previous reports, Murray allegedly gave the MLB team a $15 million ultimatum, and they nearly hit that mark.

The Oakland contingent offered Murray an additional $14 million in guaranteed cash along with his original signing bonus.

“Ninety-six percent of kids who just signed a $4.6 million deal to play baseball wouldn’t have been on no football field the following fall,” says Murray’s father Kevin told Klemko. “How can people question his love for the game?”

The A’s would have had to add Murray to their 40-man roster to complete the deal, according to Klemko.

Oakland has already paid Murray $1.5 million of the bonus and he has to repay $1.29 million of that amount and forfeit the rest.

Sure, it’s easy to say that Kyler Murray is going into the more violent sport of football to earn more money long-term — which is the case, since, the second he gets drafted (presumably) in the first few picks, he’ll have millions more than he would have had he stuck with the Oakland A’s. But to think the MLB team would throw that kind of money at a kid who hadn’t even played in a pro baseball game is even crazier, and speaks to how much of a freakish athlete that Murray really is.