If Kyler Murray Decides To Play Pro Football Instead Of Pro Baseball, It’s Going To Cost Him Some Serious Cash 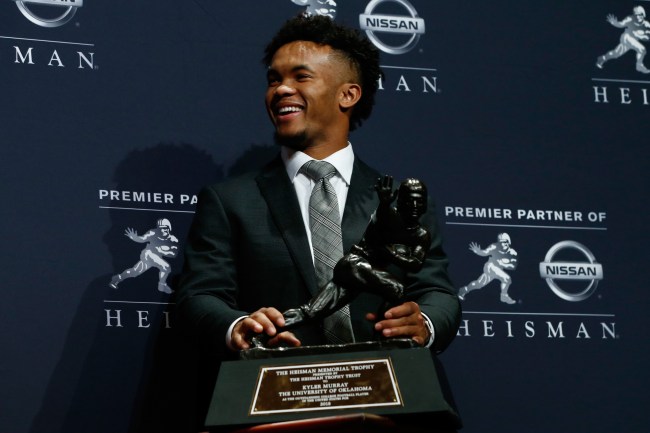 Could you imagine being Kyler Murray right now? The kid’s still just 21 years old, just won the Heisman Trophy, is preparing his Oklahoma Sooners squad for the College Football Playoff, was the No. 7 overall pick in the MLB Draft last year by the Oakland Athletics, and, with all the talent he has, will soon have to face a crucial, multimillion dollar decision — the NFL or MLB? Yeah, life’s pretty difficult for Kyler these days, isn’t it? Want to switch spots, bro?

After the A’s took Kyler Murray so high in the MLB Draft last year, and then he inked a $4.6 million deal with the franchise, many just assumed it was a foregone conclusion that the talented athlete would work his way towards spring training this upcoming season. In the words of Lee Corso, though, “not so fast, my friend.”

With so much success for Kyler Murray recently — especially on the football field — it’s natural for people to start wondering if the two-sport star’s now considering a career in the NFL instead of in the MLB? It was something he addressed prior to taking home the Heisman this past weekend, saying he was seriously considering playing both sports.

Thing is, even Kyler Murray knows that might be a pipe dream. Sure, saying you want to be a pro football and pro baseball player as an 11-year-old is one thing, but actually doing it 10 years later is something entirely different. Gone are the days of normal offseason’s for a pro athlete in one sport, let alone someone trying to do it in two.

Oh, and that hasn’t even touched on the topic of money yet, because, according to Pro Football Talk, should Kyler Murray decide he wants to just go the NFL route, well, it’s going to cost him… a lot! Per Jon Morosi of NFL Network’s Twitter, Murray’s Oakland A’s contract included a provision that protected the team should he decide to give up on baseball. Which, of course, makes sense. After all, you can’t just have people taking millions of dollars for nothing.

Can confirm Kyler Murray’s contract with #Athletics includes a provision whereby he’d forgo/repay a very large portion of his signing bonus if he opts to play in the NFL. @MLB @MLBNetwork

However, something that Pro Football Talk went on to mention is pretty interesting. While Kyler Murray would have to give up that $4.6 million he already has guaranteed in his bank account from signing with the A’s after being drafted, in the long run, it may pay off more if he decided to enter the NFL Draft instead. That’s because, per PFT, here’s what the kid could earn if he were a first-round pick in football.

So, yeah, giving back $4.5 million now might seem really, really dumb. But if he can guarantee himself nearly two-in-a-half more times that by playing in the NFL, it might not hurt as much. Man, tough life, huh?

While this all may seem speculative about Murray playing two sports, or being forced to decide between baseball or football, it’s something that he’ll have to seriously think about. And, while that $4.5 million looks nice right now, Murray’s agent, Scott Boras, says there’s a real possibility the NFL might be Kyler’s route.

“When you win the Heisman Trophy, you’re going to have a lot of information come to you and be looked at,” Boras said. “All I know is that Kyler has a tremendous opportunity to be a great baseball player. He knows that.”

Hey, did I mention how it’s pretty good being Kyler Murray right now? Kid is living the dream, so it’ll be interesting to see what route he chooses to go in, the NFL or the MLB one.