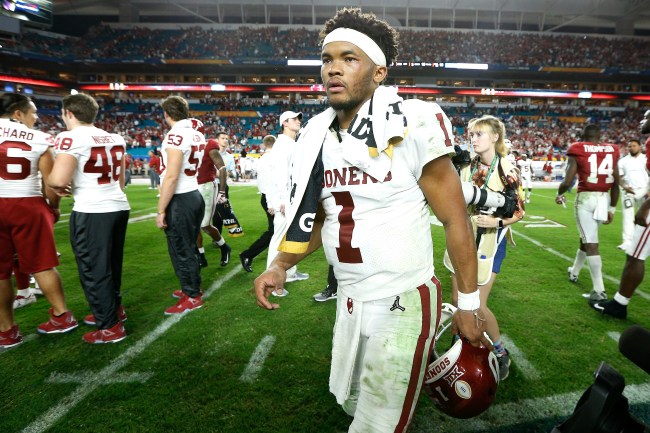 Kyler Murray has been the talk of the sports world for the past month or so, as the former Oklahoma Sooners quarterback and most recent Heisman Trophy winner had a big-time life decision to make at the tender age of 21 — pursue a career in the NFL or stick with one in the MLB, where he was the 7th overall pick by the Oakland Athletics in the 2017 MLB Draft, which included a hefty signing bonus that paid him more than his head coach at Oklahoma, Lincoln Riley. People have debated what sport Murray should play, with a bunch of people trying to help him weigh the good and the bad of either decision, with Kyler officially declaring for the NFL Draft the other day.

The latest to offer up some advice to Kyler Murray is Hall of Fame cornerback and former two-sport star Deion Sanders, who’s the only athlete on the planet to play in both a Super Bowl and a World Series. And, while Kyler has teased the idea of trying to follow in Neon Deion’s shoes by playing both sports, it’s generally believed that he’ll focus on just one sport, with the NFL currently the one Kyler Murray is most interested in right now.

According to Deion Sanders, though, he would tell Kyler to hold up and think a little bit more about that, saying the kid should pick up a baseball bat and never look back. Here’s what Sanders said to ESPN, via CBS Sports.

From his own experience, Deion Sanders advises Kyler Murray to choose baseball. pic.twitter.com/Ouq6UBQyKi

This is pretty awesome advice from an athlete who has been there and done that, so Kyler Murray would be pretty smart to hear out Deion about the pros and cons of each pro sport. I mean, the guy did it on a high level 25 years ago, so he knows a thing about which one might be a better choice. As for the idea about Kyler playing both sports, well, Sanders seemed to squash any hope of that during the interview, saying life’s too crazy as a quarterback for the 21-year-old Murray to consider the option.

While Sanders gave his take on Kyler Murray about which sport he should play, baseball, he did add that the kid is such a freak athlete that he can definitely succeed in both. And, for anyone who has watched Murray play either sport, that’s obvious, because he’s as talented as they come.

It’ll be interesting to see which direction Kyler Murray goes in, but here’s to hoping he has no regrets after making the decision, and that he doesn’t try to waffle between the two. I’ll tell you this, while it’s an awesome position to be in, I wouldn’t want to be in it at his age.