Kyrie Irving Responds To Charles Barkley’s Hilarious ‘Half Man, Half A Season’ Nickname 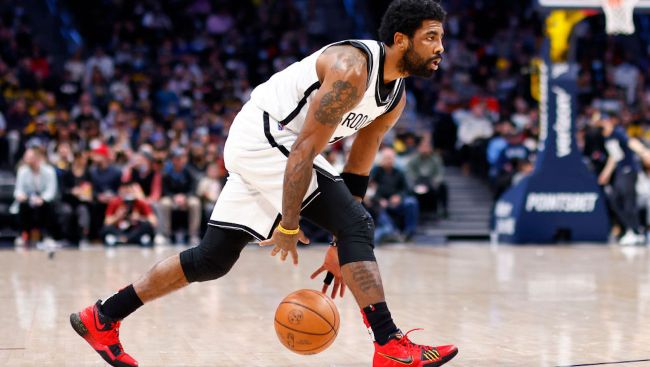 While the spotlight on Brooklyn Nets point guard Kyrie Irving was already intense, the scrutiny seems to be reaching another level as the Nets not only suffered an eleven-game losing streak mere weeks after his return to the line-up but traded away fellow superstar James Harden to the Philadelphia 76ers.

Charles Barkley, traditionally one of the most vocal names in NBA media, is one of the many to pile on Kyrie in recent weeks as he bestowed him with the nickname “Half Man, Half A Season”, which is a play on the moniker future Hall of Famer Vince Carter used to go by, “Half Man, Half Amazing.” Regardless of how you feel about Irving’s decision-making in recent years, Barkley’s wordplay is objectively clever.

Chuck calls Kyrie Irving "Half man, half a season" pic.twitter.com/Kzl0Ts3TGo

A few days later, Irving responded to Barkley’s criticism of him, saying that it doesn’t “impact” him because he’s used to it:

“This hasn’t been easy for anybody. The more that you guys keep hammering in on this and also in public spaces, I’m noticing that people like to make jokes about what is going on. And ‘half game’ or ‘half man’ or whatever it is,” Irving said to reporters.

“You know, my family has to see some of that stuff. My teammates have to see some of that. And like I said, the outside noise creeps in at times, but it doesn’t impact me because I’m used to this. I don’t play these media games. I don’t do this. This is part of my job but this is not what I signed up for in order to be going back and forth, answering questions about my personal emotions. All I’m doing is trying to be the best teammate, do my job at a high level, I wish that circumstances were different but, obviously, this impacted a lot of people and I didn’t want this to happen, but it’s the reality. Now we move forward and we figure things out and we go from there.”

"In public spaces, I'm noticing that people like to make jokes about what's going on. like 'half game' or 'half man'… The outside noise creeps in at times, but it doesn't impact me because I'm used to this."

Kyrie Irving: "In public spaces, I've noticed that people like to make jokes like 'half game' or 'half man'… But I'm used to this."

The pressure surrounding Kyrie certainly won’t subside anytime soon. The Brooklyn Nets have 25 games left this season, but only eleven of them are on the road. To make matters worse, three of those games are against the Knicks and Raptors, which means Irving will only be available for eight more games this season, about a third of the Nets’ remaining schedule. The Nets have been in free fall since Kevin Durant sprained his MCL in mid-January, as they now sit as the eight-seed in the Eastern Conference standings.

RELATED: Kyrie Irving Is Replying To Randos On Twitter, Says The Media Are ‘Puppets’ That Are Being Controlled