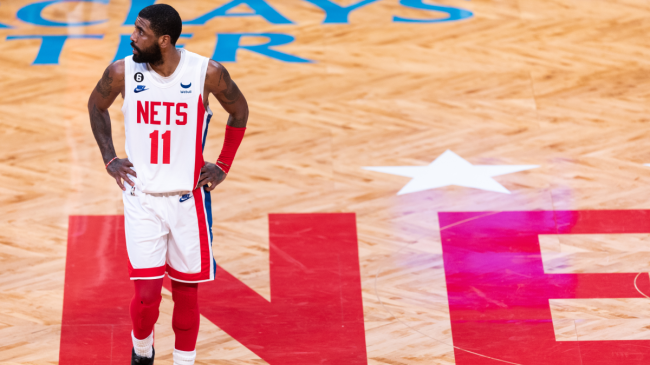 Donovan Mitchell went off on Monday night to the tune of 71 points in an overtime win against the Bulls. In the 145-134 victory, Spyda connected on 22 of his 34 shots to break LeBron James’s franchise single-game scoring mark.

Kyrie Irving apparently saw that Donovan Mitchell performance coming due to a video game session the two shared earlier in the day.

According to NBA writer Tim Bontemps, Kyrie claimed that he knew Mitchell was “locked in” after the hoopers played Call of Duty that afternoon. The Cavs’ star must’ve been on target in that gaming session because he couldn’t miss on Monday night.

Kyrie Irving says he knew Donovan Mitchell was “locked in” tonight after playing Call of Duty with him earlier, per @TimBontemps pic.twitter.com/0NnZgH6SLr

This is LeBron James level of lying on Irving’s part. It’s a wild stretch to link Spyda’s Xbox performance to an all-time Cavaliers scoring record, but here we are.

This is what Kyrie had to say about Donovan Mitchell’s performance after the game.

“Good. Records are meant to be broken. I’m happy he did. What’s funny about it is … tell Don I shouted him out, but I was on Call of Duty a little bit before the game with Don. We were playing quads, and he was locked in, I could tell. He was locked in.”

Of course, no one on the internet believes him when he says this. Take a look at the reaction from NBA fans online.

One person wrote, “LMAO NO WAY THIS REAL LOLOLOL.” Another said, “Must be hanging out with LeBron now if he knew that.”

LeBron James has been blasted in the past for unnecessarily stretching the truth when talking to the media. Most recently, he got trolled for saying he knew what the Dirk Nowitzki statue was going to look like before the Dallas Mavericks unveiled it.

Now, Kyrie is taking a page out of that book with this hilarious commentary on Donovan Mitchell’s huge night.