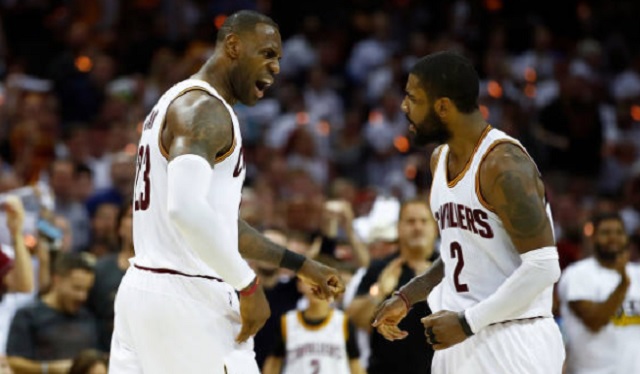 Kyrie Irving appeared on ESPN’s “First Take” on Monday morning and was grilled about his decision to demand a trade out of Cleveland. While fielding questions from Stephen A. Smith, Kyrie explained his uncomfortable departure from with very little emotion and gave few behind-the-scenes details on the reason he left the Cavs for the Boston Celtics.

Irving was asked by Smith if he informed LeBron James of his desire to exit and he said, “No.” He was pressed again and asked, “Why not?” Irving replied, “Why would I have to?”

Irving elaborated on his decision:

“I don’t think you owe anything to another person in terms of figuring out what you want to do with your life. It’s not anything personal, I’m not here to tirade anybody or to go at any particular person or the organization because I have nothing but love for Cleveland. I have nothing but love for the time I spent there. It’s nothing about that. There comes a time where you mature as an individual, it’s time to make that decision. and there is no looking back from that standpoint. There is no time to figure out how to save somebody’s feelings when ultimately you have to be selfish in figuring out what you want to do.”

Kyrie added, “It’s pointing to the perspective that I know exactly what I want. And I want to be happy, and perfecting my craft in doing so.”

Kyrie Irving on First Take when asked about leaving money on the table in leaving Cleveland: "You can't put a price on happiness."

Kyrie also said that the Cavaliers did not provide a “truthful environment.” “When you think about the journey, and you also put things into perspective for what they really are, it’s a truthful environment,” Kyrie said. “And I wasn’t getting that [in Cleveland]. And that’s where it really stands.”

Kyrie said he “absolutely” believes he can win an NBA Championship without LeBron James.

Can you win a championship without LeBron? @KyrieIrving: pic.twitter.com/kQmnwy09eU