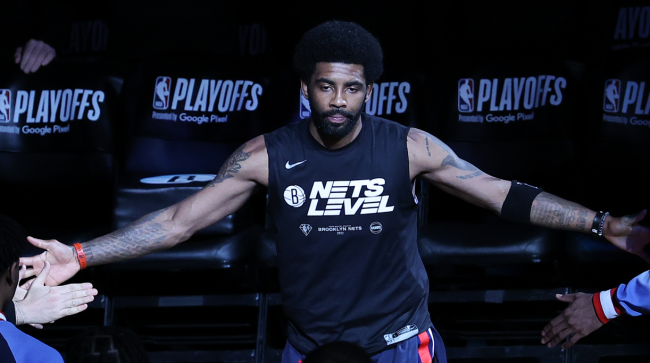 Over the weekend, Kyrie Irving was asked point blank if he still wanted to play for the Brooklyn Nets. His non-answer to the question led many to believe the answer was going to be no.

So many were surprised when Irving, who had received permission from the Nets to seek a trade out of Brooklyn, decided to exercise his player option and remain with the team next season.

Of course, Irving did have $36.5 million reasons to do so, but now his decision has made things a little difficult for the Nets who had already decided to not to give the seven-time All-Star a contract extension.

On Wednesday, NBA insider Brian Windhorst reported that even though Irving is now set to return, things are going to have to change.

“Joe Tsai, the owner, and the general manager made it clear the status quo from last season is not acceptable,” Windhorst said on Wednesday’s edition of Get Up.

Windhorst added that if Irving comes back in the fall and expects it to be the same as it was the past three years then there is still a chance that the Nets still try to move him to another team.

NBA insider Adrian Wojnarowski was also on the show and shared similar impressions of how things are going have to go between Kyrie Irving and the Nets for them to be successful next season.

“I don’t know if the drama is over,” he said, adding. “[Irving and Kevin Durant] are both under contract this season … essentially, Kyrie Irving’s on an expiring contract and teams are gonna continue to touch base with Brooklyn to make sure that they plan to keep this group together.”

Woj is not wrong there. Last season Irving and Durant played just 17 games together and neither of them have any experience playing alongside last year’s acquisition Ben Simmons, who missed the entire season after holding out and then suffering a herniated disk in his back.