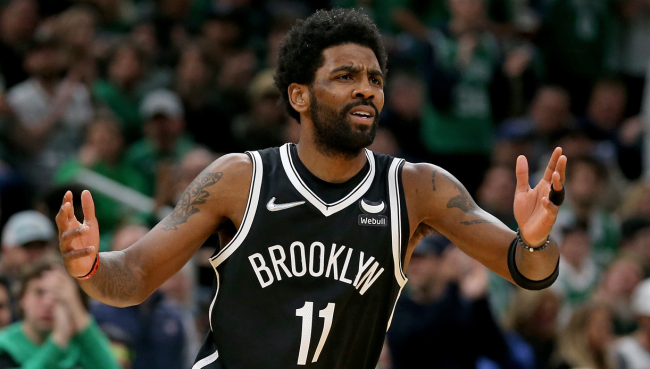 Kyrie Irving’s four-year contract with the Brooklyn Nets will expire after the 2022-23 NBA season and after three tumultuous seasons the Nets appear to have had enough.

Irving will make around $36 million in 2022-23 and the Nets reportedly are not interested in signing the talented guard to a long-term extension.

The seven-time NBA All-Star reportedly has a list of six teams that he wants the Nets to talk to about sign-and-trade deals: the Los Angeles Lakers, Los Angeles Clippers, New York Knicks, Miami Heat, Dallas Mavericks, and Philadelphia 76ers.

The Nets are concerned that if they let Irving walk it would also mean losing Kevin Durant. The 12-time All-Star has reportedly told Nets management that if Irving leaves, he wants out too.

On Monday, in a snippet from an interview with Complex Sports, Kyrie Irving was asked point blank, “Do you want to be a Brooklyn Net still?”

Irving’s response was to smile and point to a woman on his left, laughing and saying, “Pass it to my left!”

We asked Kyrie if he still wanted to be a Brooklyn Net 👀 pic.twitter.com/QYYDajosJW

As is quite often the case when it comes to Kyrie Irving, many were left confused by what he had to say.

Translation he’s on his way to the lakeshow

Yeah he can go destroy another team.

Interestingly, there was a point not so long ago that Kyrie Irving stated publicly that he wanted to stay in Brooklyn with Kevin Durant and work to build a team that can win a championship.

That was until NBA insider Shams Charania reported that discussions about Irving’s future with the Nets had come to an impasse.

After that, Irving tweeted out yet another of his many cryptic messages on social media showing a character from the show The Wire smirking while watching the demise of a former partner in crime.

This fella is a hit man that’s very good at his job, he arrived to render services for one of the main characters of the show, along the way ended up betrayed by that very same character, rendered his services on said main character

As usual, many fans have no idea what Kyrie Irving is thinking.