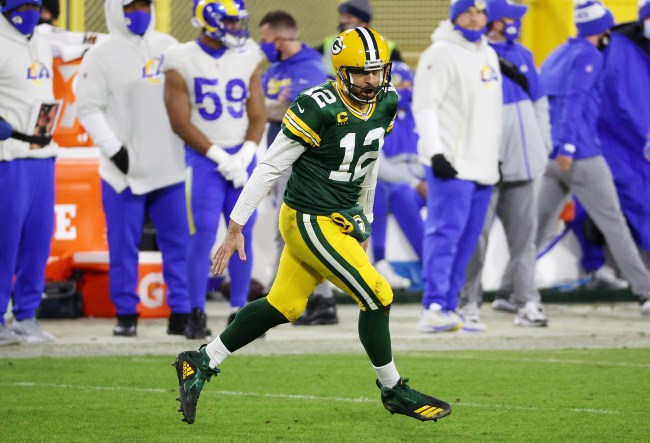 It appears that the Green Bay Packers have no interest in trading away Aaron Rodgers.

For the past week, there have been plenty of rumors about the rocky relationship between the Packers and Rodgers after he made some cryptic comments about taking some time off to evaluate his future following the team’s loss to the Bucs in the NFC championship game.

According to Pro Football Talk’s Mike Florio, Rodgers is attempting to renegotiate his contract with the team in an effort to get paid more money.

Packers quarterback Aaron Rodgers was sending a message to the team with his post-game comments after Sunday’s loss to the Buccaneers in the NFC Championship. The message likely had multiple tentacles.

Here’s one. Per a league source, Rodgers wants a new contract.

Rodgers should want a new contract. He makes $33.5 million per year. He’s going to win the 2020 NFL MVP award. And he’s getting into the later years of his last deal, which will pay him far less in comparison to other quarterbacks.

Despite all the rumors the Packers are apparently refusing to trade Rodgers.

On Sunday, NFL.com’s Sam Farmer reported that the LA Rams attempted to make a run for Rodgers before trading for Matt Stafford but were shot down by the Packers.

The Rams made a run at Aaron Rodgers, but the Packers were adamant that they weren't trading him

The Rams "made a run" at Aaron Rodgers, but the Packers were "adamant" they weren't trading him, per @LATimesfarmer pic.twitter.com/SnAn8nphYI

It would be interesting to find out what the Rams offered for the Packers for Rodgers considering they went on to trade Jared Goff, two future first-round picks, and a third-round pick for Matt Stafford.