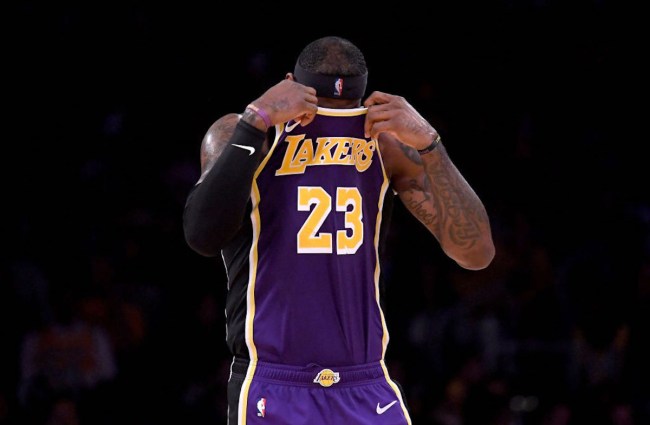 The Los Angeles Lakers are currently in the midst of a four-game skid—including a loss that came at the hands of the lowly Suns—and if I was more of a hack, I’d say something along the lines of “Folks, more like the Lose Angeles Lakers, am I right?”

Anyway, the Lakers, for lack of a better word, are bad and have been for the majority of this season. Normally, I would have qualified that statement by saying “despite the best efforts of LeBron James,” but as we’ve recently come to learn, LeBron has basically given up on the team as much as anyone else (including Snoop Dogg).

It’s not exactly a secret that the Lakers are currently in disarray, and if you somehow needed further proof, you got some last night when Rajon Rondo decided he’d rather sit closer to 2 Chainz than to his teammates.

The Lakers have been a trainwreck for most of the season but they didn’t really reach The Fugitive levels of catastrophe until the fateful Anthony Davis trade that never was, which caused the team to sink into disarray after leaks and rumors surrounding the failed deal decimated its chemistry.

Earlier this week, we learned the Lakers have gone into full Alex Jones Mode after a source claimed multiple people affiliated with the team believed the rest of the league was using the media to negatively impact the locker room.

If you had breakfast this morning, I sincerely hope you saved some room for irony because you’re about to get a heaping portion.

According to The Atlantic, the Lakers were actually behind a number of the leaks that may have had a role in how things played out (even though the Pelicans were reportedly just fucking with them the entire time):

Throughout the two-week saga stemming from Davis’ trade request, the Pelicans became frustrated about how public the Lakers-initiated discussions had become.

“We get off the phone with (the Lakers), and a minute later, offers are out there,” one Pelicans source with direct knowledge of discussions told The Athletic.

Congratulations, Los Angeles. You played yourself.