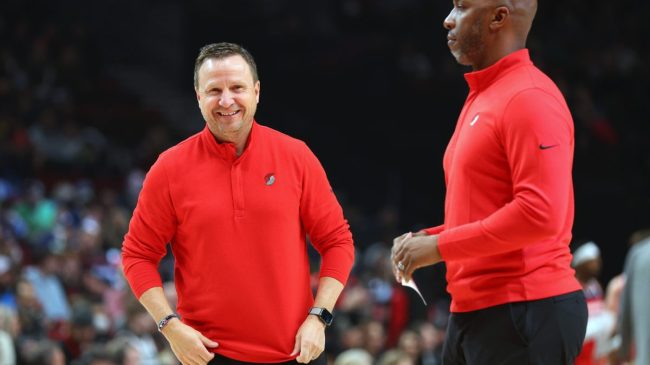 Los Angeles is in the midst of a coaching change. According to a new report, the Lakers coaching search could revolve around the future of one player.

The offseason has been filled with trade talks in LA, surrounding the team’s big three stars. Those players are LeBron James, Anthony Davis, and Russell Westbrook.

Many including Phil Jackson have weighed in, saying that James offers the most trade value. Dealing the superstar would allow the Lakers to rebuild their roster around some pieces that are already in place after letting a number of young talents walk in 2021.

Others, however, tend to think that the best route is to keep their best player while cutting ties with either Davis or Westbrook.

The ultimate decision could have a huge impact on the head coaching search.

Lakers owner Jeanie Buss, in fact, has said that they want to get a coach in place before making too many moves with the roster. But her view of one key player could be the ultimate tell in who Los Angeles targets next.

Lakers coaching search could come down to Russell Westbrook’s future

In an interview with LA Times writer Bill Plaschke, Westbrook’s name was brought up in regard to the Lakers’ coaching search.

Plaschke was asked if he believes Los Angeles plans on keeping Westbrook in 2022.

“You know, I thought they weren’t, now I think they are. I think they’re going to hire a coach and tell the coach the first requirement is ‘Make Russell Westbrook play again.'”

Host Doug Gottlieb suggests that the only person that can achieve that is Scott Brooks.

Brooks coached in Oklahoma City with Westbrook, James Harden, and Kevin Durant. He led the Thunder to a Western Conference title and NBA Championship appearance. He was able to manage three large personalities on one team.

Gottlieb believes that he’s the only one that can do it with Westbrook, LeBron, and AD.

Plaschke thinks that Westbrook is no longer on the chopping block, so whoever the next coach is, they’ve got to be able to work with the fading star.

Brooks’s name has come up in connection with the opening. If Westbrook does indeed stay in LA, Brooks might just land the job.