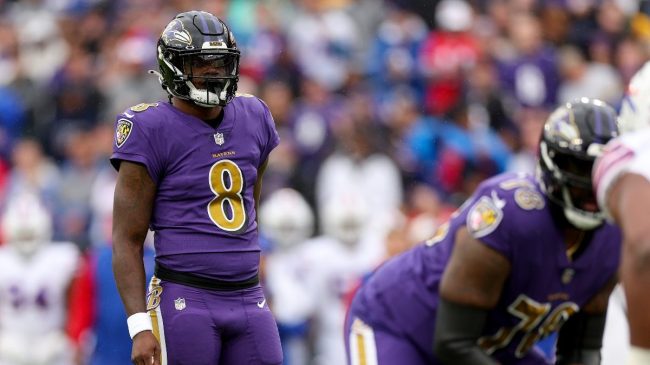 Lamar Jackson is going bonkers this season as he’s scoring more touchdowns than almost every team in the league. On Sunday, the MVP front-runner made a play against the Buffalo Bills that might just prove he’s a wizard. Seriously. We have no idea how he even did this.

This Is Living Proof That Lamar Jackson Is A Wizard

On a second and very long play, the Ravens found themselves searching for a big play to keep the drive alive. It looked like the Bills were going to acquire a monster sack to force a third-down situation for Baltimore. However, Lamar Jackson had other plans as he somehow stays on his feet and throws the ball up to his teammate, which resulted in a first down.

This play is so insane we’re left wondering how he learned this magic. Maybe Gandalf is his mentor? He would be the perfect fit for Ravenclaw at Hogwarts. Maybe that’s where he learned it. This felt like watching a David Blaine stunt. Lamar Jackson is absolutely incredible and it’s plays like these that have generated the early MVP discussions for the Ravens quarterback.

Baltimore better be ready to fork out the cash, as Jackson is definitely in line to receive a massive paycheck. The Ravens’ front office has to be kicking themselves for not agreeing on a deal this past offseason, as every game is proving Lamar Jackson deserves more and more money.

Keep an eye on Jackson, as he’s bound to continue making bizarre plays throughout the 2022 season.