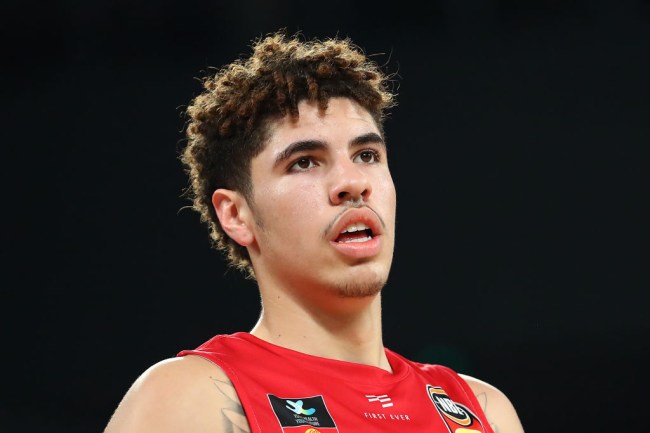 It’s been a wild few years for LaMelo Ball, who saw himself and his entire family thrust into the spotlight courtesy of the many batshit tactics his dad harnessed to generate as much publicity as possible to help his dreams of world domination come true.

One of those stunts involved drumming up hype for Big Baller Brand by charging an ungodly amount of money for the signature shoe designed for Lonzo, who had to bring multiple pairs with him to the games where he wore them thanks to their tendency to disintegrate.

LaMelo also got his own sneaker model despite still being in high school, which put a wrench in his plan to attend UCLA thanks to questions concerning his NCAA eligibility. LiAngelo also found his status up in the air after he was arrested for shoplifting during a trip to China, and after weighing their options, the brothers left sunny California for whatever climate Lithuania has.

The Balls only spent a few months in Europe before trading that experiment for another one when they returned to Los Angeles to help usher in the inaugural season of the Junior Basketball Association, which may have also been its only season as it appears it’s now defunct.

As a result, the duo was forced to explore some other options and LaMelo opted to take his talents to Australia and sign a two-year contract with the Illawarra Hawks of the National Basketball League.

This turned out to be a very wise decision on his part, as he’s gotten a chance to develop his game and show off a skill set that’s impressed a number of NBA executives who think he has a very real chance of becoming a number one draft pick.

A few months ago, Scott Van Pelt apologized for being overly critical of LaMelo and acknowledged he shouldn’t have been subject to so much scrutiny at such a young age. He said he was looking forward to watching him mature and it would appear he’s doing exactly that.

As you probably know, certain parts of Australia have been crippled by the fires burning across the continent that have displaced thousands of people who were forced to flee their homes. Those who’ve been impacted can use all the help they can get, and according to ESPN, LaMelo is doing what he can to assist them by donating a month’s worth of his salary to benefit those in need.

LaVar might come off as a bit of an asshat but he apparently did something right when it came to raising his sons, as LaMelo issued a statement where he credited his parents for teaching him the importance of coming to the rescue of those who need help.

If you also want to pitch in, here are a few ways you can help.