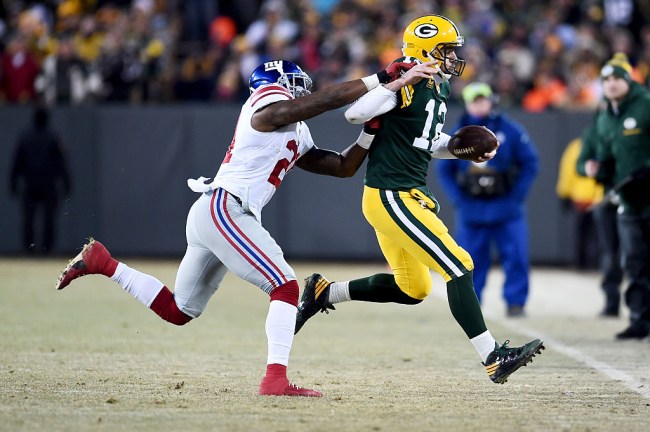 The NFL went so far to recruit Michael Jordan to create a promo for last Sunday’s Packers/Patriots game, posing the question: Who is the greatest ever–Tom Brady or Aaron Rodgers? Sports media and talking heads are perpetually attracted to this circular argument like flies on shit, as if they’re changing anyone’s mind. The men in question, Brady and Rodgers, aren’t as enamored by the argument, evident in Brady’s sit down interview with Rodney Harrison last week where he showers Rodgers with praise and seems genuinely awed by his talent.

With that said, NFL players who have played against both will always be asked their opinion on who they’d prefer under center.

On the Simms & Lefkoe Show, New York Giants fourth year safety Landon Collins was asked who the best player he’s ever played against and without hesitation he said “Aaron Rodgers.” He then recalled one play from 2016 that convinced him that Rodgers was playing chess while everyone else was playing checkers.

Aaron Rodgers is really the GOAT for doing this to Landon Collins 🐐 pic.twitter.com/OlEmnsJCMG

According to Packers Wire, the play in question is from a Sunday night game at Lambeau Field, Week 5 of the 2016 season. The Packers went on to win the game, 23-16. Rodgers threw for 259 yards and two touchdowns (but also threw for two picks).

Collins hasn’t had too much head-to-head experience with Tom Brady, but if he gets traded to an AFC team in free agency this offseason, his opinion on the GOAT could change.