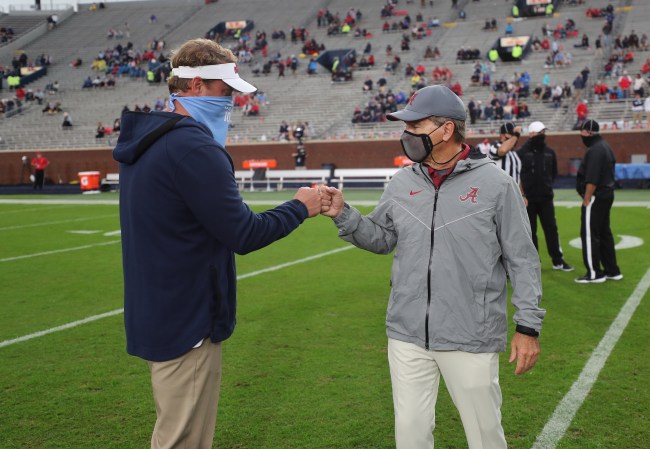 There’s no love lost between Lane Kiffin and his former boss Nick Saban.

After Saturday’s Alabama-Ole Miss game, Saban implied the Rebels were able to score so much because they may have been able to steal their defensive signals.

Well I’m not really calm,” he said. “I’m boiling and bubbling, trying to be encouraging to the players. Trying to make the best adjustments we could make at halftime. It seemed like everything we did, though, they had an answer for. I don’t know if they had our signals or what. I’m not — that’s not anything unusual. But it seemed like every time we called something, they had the best play they could have against it. They had a really good plan. Lane is a really good coach. They got a good offensive team. They’ve got some good players on offense.

Kiffin didn’t appear to appreciate the implication that his team was stealing signals and fired back at Saban’s allegations.

FYI when u go as fast as we do we call our play first. Stealing signals wouldn’t help us at all because we are snapping the ball why they were still trying to just line up. #facts #ComeToTheSip ⁦@AlabamaFTBL⁩ go win the natty ⁦@OleMissFB⁩ https://t.co/6EvFe8PX4R