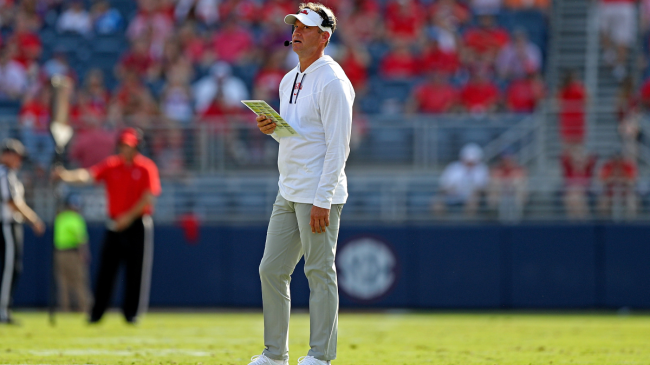 Lane Kiffin has the Ole Miss Rebels sitting pretty as they enter SEC play. The team is 4-0, picking up wins over Troy, Central Arkansas, Georgia Tech, and Tulsa.

Now, that’s not necessarily a gauntlet of competition, but it’s been a nice tune-up as they enter a conference outing with Kentucky to open the month of October.

And in typical Lane Kiffin fashion, the Rebels are putting tons of points on the board. Ole Miss has rolled through its first four games, holding a scoring advantage of +124 points. The team is ranked No. 14 in the country, prepping for a matchup against a Top 10 opponent at home. All is well in Oxford… or so it seemed.

Kiffin was heard sounding off on the fanbase for not putting butts in seats to watch the team play. Attendance from last Saturday’s game with Tulsa, which was OM’s closest margin of victory, was… poor.

The players and coaching staff have taken notice, and Kiffin put the program’s “supporters” on blast in a Wednesday press conference.

“When you come back out, run out of the tunnel and it looks like a high school game playing in a college stadium, you can’t let that affect you. There’s psychology to that, there’s home field advantage for a reason. When it goes the other way, you kind of have that feeling like, ‘man are we still really playing in a game, here?’ The players have to fight that.”

Just a slap in the face to Ole Miss fans everywhere, calling Vaught-Hemingway Stadium a high school atmosphere. While the relationship between Kiffin and the Rebel fanbase looks to be rocky, a few fans on Rocky Top are taking joy in the frustrations.

After hearing Kiffin rip into the Ole Miss fanbase for low attendance ahead of a big home game, Tennessee fans immediately trolled the coach online.

Vols fans are a special breed. They seldom forget when wronged, they’re always “back,” and they become unhealthily obsessed with the oddest of topics (this year, Shane Beamer is in the crosshairs).

And they certainly don’t have any love lost for Kiffin, who bailed on their program in the middle of the night for USC. Last year, they threw mustard bottles and golf balls at the coach after the Rebels beat the Vols on their home field.

But one thing they do show is support of their football program. Take their recent matchup with Akron for example. The Vols sold out 102,000 seats at Neyland, with most staying til the end. Those Tennessee fans were quick to point this out while taking shots at Kiffin on Twitter.

You're at Ole Miss because you went down a path that began by screwing over an historic blueblood that puts 102K in its stadium against Akron. I feel just awful for you. 😂

Didn’t you leave us at UT that just sold out a game against Akron? This is what you wanted. You wanted an Ole Miss fan base. You had a Tennessee fan base