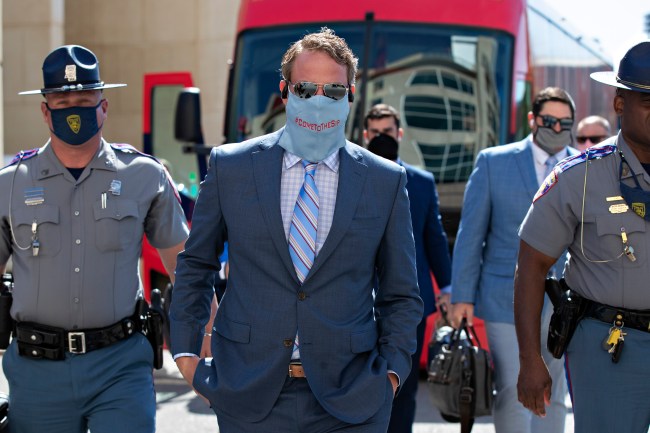 Ole Miss head coach Lane Kiffin is one of the most polarizing figures in college football. The 45-year-old has coached on every level and has seen varying success at each stop, but he has one of the most explosive offenses in the nation in Oxford, Miss. The Rebels faced the South Carolina Gamecocks on Saturday night and went back-and-forth in a shootout that went well over 100 combined points.

Quarterback Matt Corral dropped back early in the fourth quarter and saw his receiver Elijah Moore streaking down the middle without a defender in sight. He was not the only one who saw the wide-open man, as Kiffin recognized the easy six points right away. Before the ball had even left Corral’s hands, Kiffin threw his hands up to signal a touchdown. When the pass was completed, Kiffin sent his clipboard flying into the air and took off running down the sideline. His headset came off and he capped off the celebration with his signature fist pump.

Look at the bottom left corner…@Lane_Kiffin just sent his clipboard TO THE MOON and sprinted down the sideline before the touchdown was even scored. 🏃‍♂️💨😂 pic.twitter.com/3NSLU7iRVo

This is not the first time that Kiffin has done this, as he is known for his early celebrations when he knows that play is there. Here he is doing the same thing on a similar play as the offensive coordinator at Alabama.

He does it on this touchdown in the National Championship game. Talk about confidence!

One more for good measure. Here is Kiffin throwing his arms up as the ball sails down the sideline to connect with an untouched receiver at Florida Atlantic, his most recent program prior to returning to the SEC.

Watch the bottom of the screen. Lane knew FAU had this one. pic.twitter.com/FdJOu3ktM0

Never stop being yourself, Lane.