Lane Kiffin Is Getting His Money’s Worth On Twitter With The SEC’s $25,000 Fine 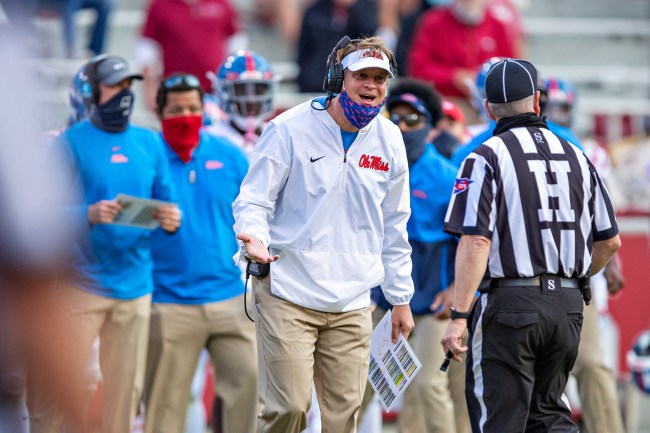 The Southeastern Conference blew a crucial call in Ole Miss’ loss to Auburn on Saturday and head coach Lane Kiffin is not happy.

On a crucial punt late in the fourth quarter, the Tigers’ return man made a late decision to let the ball go and didn’t get out of the way. His pinky clearly touches the ball and   the Rebels recovered the fumble in the end zone. The play was blown dead and ruled a touchback, and the review was very quickly deemed inconclusive.

The Ole Miss sideline was livid and called for play to be stopped, but Auburn was allowed to get its next play off. Kiffin called out the officiating after the game and has been very vocal on Twitter. After retweeting a post that called the SEC a “disgrace,” and making a handful of other jokes over the weekend, Kiffin received a $25,000 fine from the league.

Y'all are a disgrace @SEC your officiating is absolutely atrocious. @SECOfficiating

If y'all want to just keep gifting Auburn wins, just say it. pic.twitter.com/LJ01avk5ZI

Kiffin took the call with commissioner Greg Sankey and other SEC officials on Monday afternoon and he said that fans “deserve to hear what he was told.” He couldn’t share because of rules so he immediately went to Twitter to make the fine worth every cent.

It began with a link to a YouTube video of a man paying a $3,000 fine from his local DMV in pennies.

Kiffin then began replying to himself with a thread of figures related to how many pennies he would need to pay the fine that was given to him by the SEC.

It looked at first like the 48-year-old was not very good at math. And then came the uppercut, knockout blow.

Was just checking to see if @SEC would review my math to get it right this time??? After future review it’s 2.5 million pennies. Thanks for stopping to get it right 👍💰🔥 https://t.co/zvWvWw0GFk

The call was clearly incorrect and Kiffin is having a hilarious field day online. Ole Miss will have a chance to take its anger out on Vanderbilt this weekend.