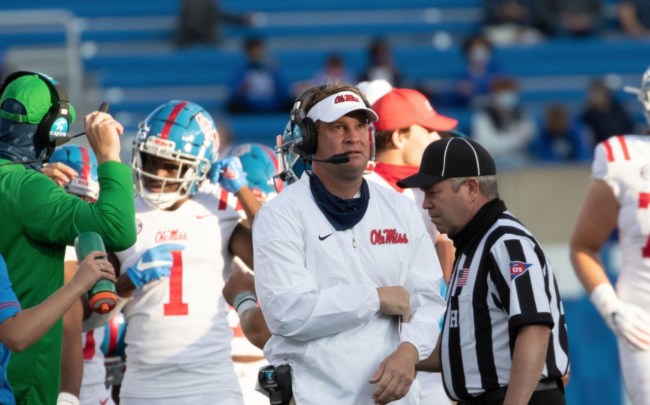 The seasons for both Ole Miss and Auburn stayed very much on-brand on Saturday. The Rebels suffered another tight loss while the Tigers escaped yet again with a win they didn’t completely deserve for the second time this season.

Ole Miss took a 28-27 lead with just over five minutes left in regulation and on the ensuing kickoff, the ball bounced toward Auburn return man Shaun Shivers. In real-time, it looked like he simply misplayed the bounce and let it go into the endzone for what would be a touchback, but in slow-mo it’s clear that the ball made contact with at the very least his pinky and maybe even grazed his leg.

You can see Shivers’ reaction to go and chase the ball into the end zone as well. Ole Miss jumped on the ball in the end zone for what should have been a touchdown for the Rebels, but in the end, the play wasn’t even reviewed. Auburn went three and out on that drive but later got the ball back and went on to score the winning touchdown with 1:11 left in the game to win 35-28.

As you might imagine, Ole Miss head coach Lane Kiffin was not happy with how things went down for his team late in the contest on Saturday.

At the beginning of his Monday presser, Kiffin explained that he had just gotten off the phone with the SEC and that he has really struggled with how things went down on Saturday. Kiffin was far from pleased with the conference’s “explanation” about the play, how there was no review and the fact that he couldn’t let the media, his players, or Ole Miss fans what the exact explanation for the missed call was.

Lane Kiffin calls out SEC policy, credit the Ole Miss coach for sticking up for his team.

“I really wish for our players, for our fans, that they could hear what I was just told. I think they deserve to.” pic.twitter.com/KM3I3lkoYq

The SEC released a statement following his press conference about the play itself while also indicating that the conference had fined Kiffin $25,000 for “public criticism of officiating.” According to the statement, since play wasn’t stopped to officially review the play, officials never saw the slow-motion video of the play at all.

This is now the second time in its five games this season that Auburn has escaped with a win in extremely dramatic fashion.

Trailing by one against Arkansas in Week 3, Tigers quarterback Bo Nix dropped a snap with 20 seconds left in the game, picked up the ball while turned backwards, and spiked it into the ground to stop the clock. It could have easily been ruled a fumble that Arkansas did recover, but instead, officials only ruled it intentional grounding before Auburn kicked the game-winning field goal with seven seconds left to win 30-28.