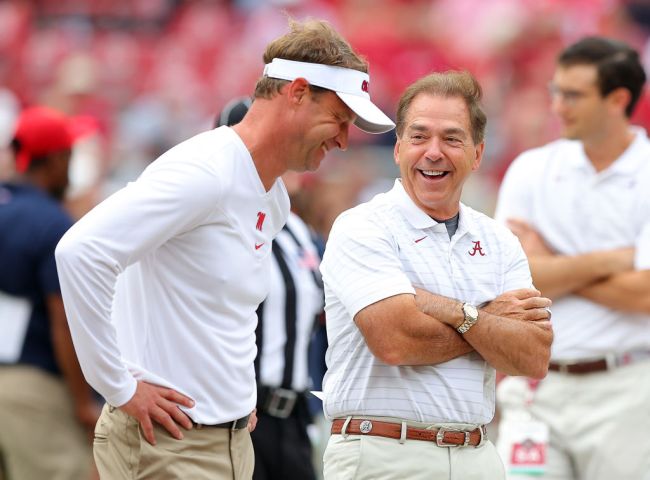 Kiffin was hired to take over the program after being let go from the Oakland Raiders, made the ever-delusional fanbase believe that their team was headed back to the national championship, and then bounced for the Southern California job. Pete Carroll went north to the Seattle Seahawks and his former offensive coordinator took over.

Tennessee fans, as with everything, are still salty. Immediately after Kiffin’s announcement, they burned couches and rioted outside of Neyland Stadium.

Now, 12 years later, they are taking shots at Kiffin ahead of his first return to Knoxville as a head coach. The 46-year-old has been back to his former stomping grounds as an assistant with Alabama in 2016 and — after putting a beatdown on the Vols — flipped his visor to the crowd.

This year is different.

Kiffin is the head coach of No. 13 Ole Miss and Tennessee believes that it has struck gold with head coach Josh Huepel. Thus, the fact that the game is UT’s first true sell-out in nearly six years, comes as no surprise.

Earlier this week a Knoxville content creator wrote a poem to Kiffin and shared his reading on Twitter. Kiffin, who is very active on the social media site, found the video on Saturday morning ahead of the game and couldn’t stop laughing.

He also, as he always does of late, took the high road and wished the entire Volunteer program and its fan base good health.

Can’t stop laughing 😂 This is awesome. Thank you for that @Vol_Football @OleMissFB Wish great health to all. ❤️ https://t.co/5CXD19fGm2

Ole Miss and Tennessee kicks off from Knoxville at 7:30pm ET on ESPN2. Will Kiffin put his former team in their place? Or will the Vols get the last laugh and their revenge?