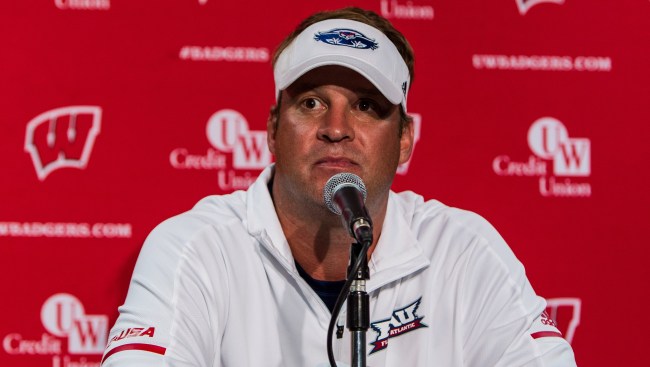 Anyone who follows Florida Atlantic University’s head football coach Lane Kiffin on Twitter knows that his account is a treasure trove of entertainment.

Of course, that’s because the man himself is a treasure trove of entertainment.

What other major college football coach do you know who’s been urged to wear a bulletproof vest to protect him from angry fans? Or has admitted checking out other coaches’ wives to assess their recruiting skills? Or has the stones to call out his former boss, and man who never returns his texts, Nick Saban for being a hypocrite?

The answer is none.

So, naturally, when a video of a young lady absolutely ragdolling and pancaking a guy in a McDonald’s restaurant went viral, Kiffin was there to offer her a scholarship as well.

Kiffin also got a kick out of a comment made by Ohio State legend Mauriance Clarett who wrote, “She has good leverage and balance.”

Kiffin even managed to get in a shot at his old school Alabama.

Some of the comments on the video though…

Those are grown men she is throwing... Get her a scholarship at Independence CC

Violent with the punch, works to finish, and moves well enough to pull. I have a spot for her up front!

I think I'm in love.. pic.twitter.com/Xk8yakbcoR

My man at the Coke Machine is losing his shit laughing, I would be too.

Man, I love the internet.