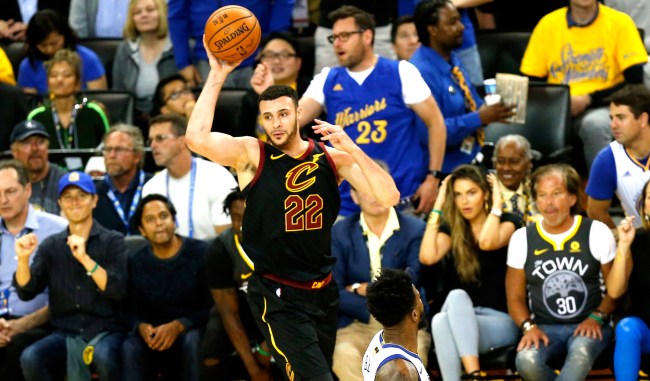 Sometimes rich and famous people actually get it. Not all of them are so insulated from the real world that they are oblivious to the plight of the average American. NBA star Larry Nance Jr. is apparently one of those people.

Larry Nance Jr., whose dad is 3-time NBA All-Star and the winner of the very first NBA Slam Dunk Contest, Larry Nance Sr., is doing something very cool and really creative to try and help out local businesses in the Cleveland area this NBA season.

Nance, who by the end of the 2020-2021 NBA season will have made almost $30 million, could be like many other rich people could definitely just write a check, which he may or may not have already done, but with the pandemic continuing to affect so many small and local businesses he came up with another way to help.

Locally owned businesses are some of the pillars of our communities. They ahve been, and still are being hit hard by this pandemic. In an effort to bring some extra support to them I need your help!

Send a shirt (XL), hat, or piece of apparel from any of your favorite local businesses you’d like to see me help out to me at:

I will wear each piece of apparel to a game this year, be photographed, and post about that business to help bring awareness. On top of that, I will be selling my worn jersey from said game, and also will match whatever price the jersey sells for, with 100% of the proceeds going to the business being represented that night.

This is our city, these are our communities, let’s help each other out in this time of need!

All apparel we receive, after being supported and acknowledged, will be donated back to local area homeless shelters

This is a stellar idea and one that would be even better if it was adopted by other stars in the NBA, as well as the NFL, Major League Baseball, and other pro sports leagues. What an easy and very fun way to help out with the added bonus of getting the fans involved as well.

Larry is an amazing role model. He’s been a mentor to my nephew, who was diagnosed with Crohn’s at 12 years old. Larry emailed back and forth with him and they even got to meet in person. Thank you for your kindness, you are a true mensch ❤️

We just sent you one of our t-shirts! We are a small Cleveland charity that trains an places service dogs with children who have special needs! Your support would mean the world to our kids! pic.twitter.com/euumVFfx9N

Im a local business shoe company that has just started out and I would surely appreciate your help in getting my business out there. Here's my website https://t.co/vem1TulQSI and IG: JayRazbyCollection. Thanks Larry! pic.twitter.com/WlnsKLukzE

Say what you want about the NBA but they encourage the players to be socially active. The NFL wouldn't allow free advertising no matter if it's for a good cause