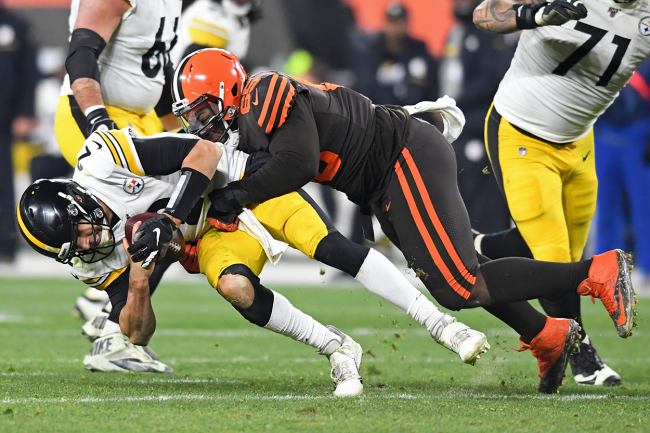 It has not been a very good offseason for Mason Rudolph. After becoming the incumbent QB1 for the Steelers by default after Ben Roethlisberger’s retirement, the team signed Mitch Trubisky and drafted Kenny Pickett.

And now, his new teammate once helped to beat him up.

On Tuesday afternoon, Pittsburgh announced that it signed defensive tackle Larry Ogunjobi. Both Ogunjobi and Rudolph were involved in the most-notable NFL fight in recent history— but on opposite sides.

We have signed DT Larry Ogunjobi to a one-year contract. @BordasLaw

Rudolph, unfortunately for him, is best known for being on the brunt end of Myles Garrett’s helmet swing. During that same brawl, Ogunjobi was then a member of the Cleveland Browns. Although he did not throw any punches or swing his helmet, he was the one who shoved Rudolph to the ground during the altercation as the quarterback complained about being hit in the head with his own helmet.

Myles Garrett hits Mason Rudolph in the head with his own helmet, a breakdown pic.twitter.com/hi4Jc8Cmgo

As a result of his role in the fight, Ogunjobi received a one-game suspension. He also said that Garrett told him that Rudolph used a racial slur immediately after the brawl was broken up. Rudolph has vehemently denied using any such language.

The fight between the Steelers and Browns, which involved both Rudolph and Ogunjobi, happened more than two and a half years ago. However, there is no way that either guy has forgotten about that infamous evening.

New #Steelers DT Larry Ogunjobi is the player who pushed Mason Rudolph down in the Myles Garrett incident a couple years ago.

As a result, it could be a bit tense when both players take the field for training camp with Pittsburgh in a few weeks. Assuming that Rudolph is still a member of the team, that is.

Now all we can do is wait for the fight to be brought up at one (or both) of their press conferences!