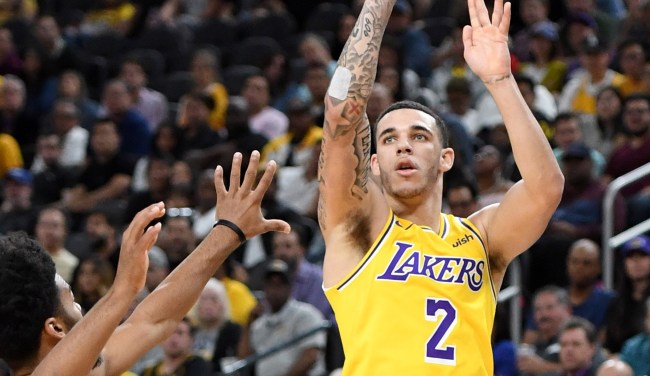 Despite LaVar Ball very publicly stating that his Big Baller Brand is not dead during a speech at this year’s BBB High School All-American game, his son, Lakers guard Lonzo Ball, has already scrubbed his social media of any mention of the brand and even gone so far as to cover up his BBB tattoo.

After admitting that the company had reportedly been swindled out of $1.5 Million by a co-founder, all three of LaVar Ball’s sons, including LaMelo and LiAngelo, unfollowed Big Baller Brand on social media.

Lonzo’s Lakers teammate LeBron James even went so far as to hint that the eldest Ball son could be moving to Nike in the near future.

According to LaVar who spoke to TMZ on Monday, it’s all good.

“We had a meeting before the story came out, man. And, everybody was in they feelings. What I mean by that is, we’re not really thinking. ‘Cause I told them we’re shutting down everything, ’cause I don’t want him to get nothing.”

“So, I said it was shut down. And, that’s why DMo and everybody heard what I said and was going on them things. Okay, triple B’s is done.”

LaVar says he came to his senses and decided to keep the brand alive … but not before Zo’s tattoo was covered.

Still, LaVar has no problem with Lonzo covering his BBB tat, ’cause the art was a distraction anyway.

“Lonzo had to cover that Triple B up anyway. You can’t play with no band-aid when you not even hurt. It feels weird playing like that. So, you gotta cover it anyway.”