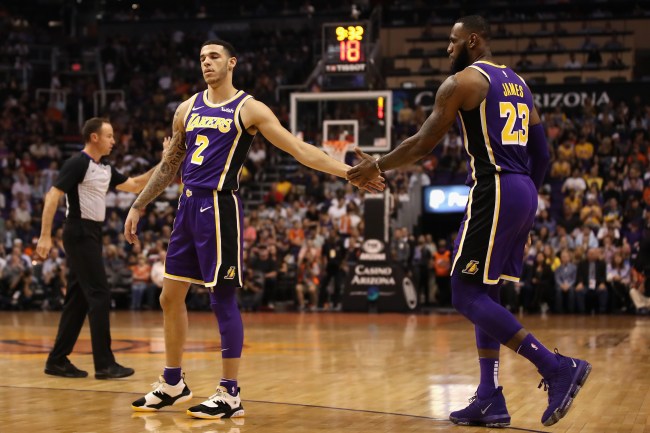 Lonzo Ball hasn’t played for the Los Angeles Lakers since January 19 because of an ankle injury, but that hasn’t meant the former No. 2 overall pick hasn’t made headlines. As most of us probably know by now, Lonzo’s accusing a family friend named Alan Foster of stealing $1.5 million from him. Foster happens to be one of the co-founders of Big Baller Brand along with Lonzo’s dad, Lavar Ball. And, because of all this mess, the Lakers point guard has allegedly hinted that he’s moving on from Big Baller Brand to join Nike — assuming a recent Instagram post is factual and not just some cryptic thing.

Seeing as how Lonzo Ball used a Nike slogan on the picture sure makes it seem like he’ll be wearing the Swoosh moving forward. And, if that’s the case, Ball’s teammate, LeBron James, sure is happy with how the 21-year-old is taking more control of his business decisions and is becoming a man by shunning his dad’s business idea. Just look at what James had to tell Tania Ganguli of the Los Angeles Times about the situation going on with Lonzo.

“I love the fact that he’s taking control of his [stuff],” James said. “I mean, he’s, that’s what’s really, really dope to me. Once I saw that story I just seen a kid turning into a man. ‘This is my career and I’m taking this. I done had enough with — whatever. I done had enough. Whatever. If I’m not going to be successful, I’m not going to be successful on my terms.’ I saw a lot of that. We’ll see.”

“I’m more proud of him because I like the fact that he’s taking command of his [stuff].”

He added with a smile: “I mean he plays well when he has on Nikes.”

James is, arguably, the biggest athlete endorser that Nike has right now, so of course he’s going to try and encourage Lonzo Ball to sign with the brand now that he’s basically trashed all association with Big Baller Brand. And, while the entire Lakers season has been an absolute debacle, at least Lakers fans can be encouraged by James supporting his young teammate even though the team doesn’t have much to play for at this point.