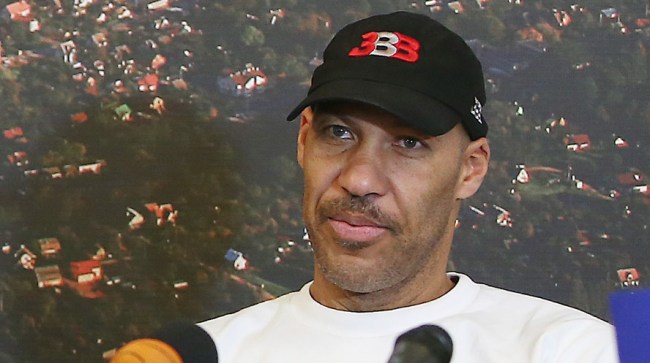 The only surprising thing about what LaVar Ball had to say about LeBron James joining the Los Angeles Lakers is that it took him so long to say it.

Especially considering the fact that he all but guaranteed it would happen.

LaVar also told Undisputed that his son Lonzo would make LeBron a better player — a scorching hot take he doubled down on in a new interview with Overtime.

“Lonzo’s going to get along with anybody he plays with. He’s just got that special gift,” said LaVar. “And LeBron is going to be fine with that on the fact that Lonzo’s not 6-foot-1 or 6-foot-2 like Kyrie. Lonzo’s not ball dominant where he just dribbling the ball and you watching him trying to do a crossover and make a layup down the lane. Anybody would enjoy playing with my boy. He’s always been like that.”

How exactly will the two players will co-exist on the court? Easily, according to LaVar.

“Lonzo ain’t going to play off the ball,” explained Ball. “How’s LeBron going to play point? Lonzo will be pushing and he get it out of his hands too quick. Lonzo don’t do all that dribbling. All he got to do is run the lane and the pass going to be right on the money.”

Sounds like it’s going to be a real day at the beach every time Lonzo and LeBron are on the floor together.

“We going to play so far, he’ll throw him touchdown passes and be scoring all day. And then when he don’t, he going to throw the long pass and Lonzo will shoot the three-pointer very easy,” said LaVar.

Ball also spoke about topics like his JBA league, Lithuania, LiAngelo’s route to the NBA, how great LaMelo is going to be, and more, during the entertaining 11-minute interview.