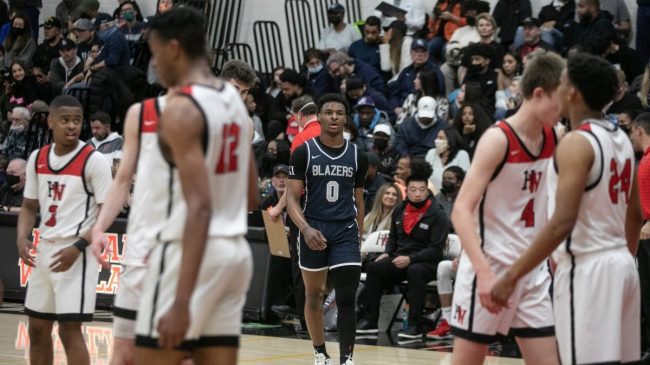 Has LeBron James’ son Bronny found his college destination? It sure looks like that could be the case.

Bronny is one of the nation’s best high school basketball prospects in the 2023 class and has recently skyrocketed up the rankings. But his recruitment hasn’t been straightforward.

A number of teams have come to the forefront. Though LeBron says his son is nowhere near a decision, despite reports of the Oregon Ducks taking the lead.

It appears that one team may be giving itself a fantastic shot, however.

LeBron, Bronny James Live It Up At The Horse For Ohio State-Notre Dame Game

James has not yet taken any of his five official visits. That is, until this weekend when he took a trip to a place very close to his dad’s heart.

Both Bronny and LeBron made the trip to Columbus, Ohio to visit to Ohio State University. Not only is the school close to LeBron’s hometown of Akron, it was also his favorite school growing up.

In fact, LeBron has said in the past that he would have gone to OSU had he gone to college.

The pair picked a great weekend to visit. The second-ranked Buckeyes football team opens the season with a marque matchup against No. 5 Notre Dame. LeBron and Bronny got a chance to take the field prior to the game and appeared to be living it up.

Bron and Bronny pulled up to the Ohio State-Notre Dame game 👑 pic.twitter.com/NnEvzWROwT

The four-time NBA MVP and NBA champ was completely decked out in Buckeyes gear. And the duo appeared to have pretty decent seats for the showdown as well.

Per his Instagram, Bronny James is here at Ohio Stadium. The rest of the #Buckeyes hoops recruits are not here yet. pic.twitter.com/KpXRenUe1D

Ohio State enters the game as a 17-point favorite according to DraftKings SportsBook. While the Fighting Irish are playing their first game under head coach Marcus Freeman, who played for the Buckeyes from 2004-2008.